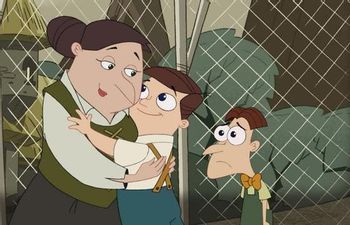 And the father prefers his dog, Only Son. Poor, poor Heinz Doofenshmirtz.
"You ever hear Dad introduce us to people? [brightly] 'This is our daughter, Dottie. [disgustedly] And this is our other daughter... Dottie's sister.' Should have just had you and bought a dog."
— Kit, A League of Their Own
Advertisement:

The nasty end of Parental Favoritism is when one child is neglected over the other(s). When there is a first banana, there is a second banana. That's The Un-Favorite — the child in the family who can just never seem to catch a break.

This is the child who's the big let-down to their parents, the daughter that was supposed to be a son (or vice-versa), the child the parents had by accident when they'd already decided they didn't need another mouth to feed or they wanted to be done raising children, the adoptive, foster, or stepchild that came before the parents had a biological child, the illegitimate child conceived by infidelity on the part of one of the parents (if not even worse). But all in all, this is basically the kid who is always getting the short-end of the stick. In some extreme cases, this may cause Rich Sibling, Poor Sibling, especially if one sibling is forced into service to the other.

The audience's attitude towards the Unfavorite is often based on what age the character is. An adult character who's an Unfavorite will be treated by the audience with empathy, albeit with the implication that they really should have gotten over this by now. A child Unfavorite, on the other hand, is likely to get the audience's unreserved support.

Age notwithstanding, this is usually a character you sympathize with on some level or another, because we're supposed to root for the disadvantaged; expect the favorite either to be rubbing their status in their sibling's face, be an Aloof Big Brother, or completely unaware of the situation. It is, however, completely possible that the character is interpreting some behavior as favoritism — and the other character also regards himself as the Unfavorite. (Cue Sibling Rivalry.) Also, another possible situation is that the favorite is indeed aware of the situation, sympathize with the Unfavorite, and may even start the "talk with the parents" scene about how this is supremely unfair.

And Heaven help the poor kid if the favorite child is dead (possibly having received the status of "favorite" by dying). See also You Should Have Died Instead. The same thing goes if the Unfavorite was a result of Death by Childbirth, where the family hates the kid for "murdering" their mother.

A middle child can feel like this. Can easily escalate into Black Sheep or Cain and Abel, or in particularly nasty cases, one or both of the parents having a go at offing the Unfavorite offspring. May be rooted in a Death by Childbirth. May cross over with "Well Done, Son" Guy if the Unfavorite wants some recognition. If the favorite of the parents isn't even a member of their family, it's a case of Why Are You Not My Son?. When each parent has one favorite and one Unfavorite, it's Jacob and Esau. In a workplace situation, see Boss's Unfavorite Employee. When the parent(s) die, can become the Disinherited Child. When even the family pet is favored over the unwanted child, they are Treated Worse than the Pet. If this causes bad blood between the parent and their child, see Hates Their Parent.

These types are viewed as concrete and unchanging. However, if Abusive Parents are brought into the equation, there's a Popularity Cycle involved, where one kid will be elevated above the other in a circular motion.