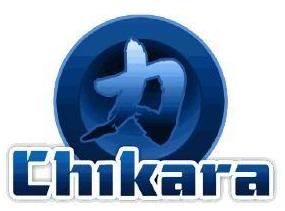 "Madame de Staël said, "In life, one must choose between boredom and suffering." de Staël is dead. There is always an alternative."
—Botchamania #194

, bumper ads for CHIKARA
"So I show up at the show, and I'm expecting a normal wrestling show... there's like a f#%ing dude in a dinosaur outfit walking around, and there was a stipulation that someone would be sent back in time."
— Jon Moxley
Advertisement:

CHIKARA (also Chikara or Chikara Pro, translated from Japanese as "Power") was a Professional Wrestling promotion based in Philadelphia, PA that chiefly toured the northeastern United States, known for its light tone, sense of humor, and high-flying action. It was established in 2002.

It was heavily influenced by not only the American style of pro wrestling, but also Japanese puroresu and Mexican lucha libre, as well as a heavy dose of Superhero comics and Godzilla films. Unlike most wrestling promotions, CHIKARA had a defined season and off-season, and its season was built around 4 annual events: King of Trios (a weekend-long tournament of three-man teams), Aniversario, the Young Lions' Cup (a tournament to crown the new holder of the Young Lions Cup, a title that could only be held by wrestlers 25 years old or younger), and the Torneo Cibernetico (a 16-man lucha libre elimination match that served as the show's main event). CHIKARA also operated the Wrestle Factory, a wrestling training school; many of CHIKARA's wrestlers are Wrestle Factory graduates. The Wrestle Factory, as of August 2020, has continued to operate even after CHIKARA's closure.

CHIKARA was also notable for being about as family-friendly as wrestling can be: in addition to the wacky over-the-top-and-then-some characters and the comedy bits within matches, CHIKARA and its fans did their best to keep adult language out of the shows (a popular story goes that when a fan tried to start a "Holy shit" chant at a show, he was met with the rest of the crowd chanting "Shut the heck up!"), and there's virtually no kind of sexual content. If WWE is TV-PG, CHIKARA could be TV-Y7.

CHIKARA's events can be seen via DVD, available from Smart Mark Video

. Additionally, you can pay to watch each show on the Smark Mark Video On Demand

website (pre-Season 15) or on the CHIKARATopia stream offered by the CHIKARA website. The promotion also produces a weekly video podcast - "CHIKARA Podcast-A-Go-Go" - that can be viewed on their official YouTube channel.

CHIKARA was cross-promoting with Kaiju Big Battel for a time, though the only remnant of said cross-promotion was Louden Noxious (now Gavin Loudspeaker), who served as an announcer for both companies 'til his departure from CHIKARA in 2015. CHIKARA also joined up with the USA counterpart of Japanese promotion Dragon Gate to help promote their arrival in the United States, with several wrestlers appearing on their shows and Leonard F. Chikarason (as well as Mike Quackenbush) doing commentary for the PPV and DVD versions of their shows.

Following an abbreviated Season 21 due to COVID-19, CHIKARA ceased operations on June 24th, 2020. People involved in the #SpeakingOut movement made massive allegations against Mike Quackenbush related to harassment of female talent and trainees by Quackenbush himself and other trainers at the Wrestle Factory. Many roster members, including Hallowicked, Dasher Hatfield, and Kimberlee, resigned from the promotion in protest, and Quackenbush subsequently announced the closure via his Twitter account.