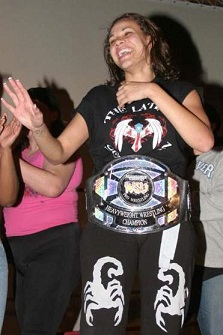 Jasmine Benitez (born November 17, 1980), known by her ring name Mercedes Martinez, was a standout American college basketball player from Waterbury CT who turned to Professional Wrestling after an injury and training from Jason Knight. She is best known for her work in SHIMMER, WSU and, as Maria Toro, Wrestlicious. She debuted in 2000 in the New England independent scene, made her way across the country to win the NWA Midwest Women's title and then went back to the start where a new New England Championship Wrestling women's division would be built around her (and Sumie Sakai). From there Mercedes would go on to compete for CHIKARA, CZW, TNA, Ring of Honor and many other promotions. She debuted in SHIMMER on its first show, going to a time-limit-draw with Sara Del Rey.

Among her in-ring achievements, she is a NWA Midwest Women's Champion

After a mostly uneventful and honestly rather embarrassing stint in WWEnote the most notable thing she did was briefly appear in the Gooker-winning stable Retribution before being dropped back to NXT the week after its debut, making her the lucky one from the group and a brief spell in Impact Wrestling, she signed with All Elite Wrestling in late 2021.

She's not in any way related to Bayley, whose real name is Pamela Martinez.