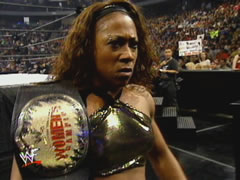 Carlene Denise Moore-Begnaud (born August 27, 1973) is an American Professional Wrestler from New Orleans, Louisiana best known for her work in ECW and WWE as Jazz. She started her career in 1998 after training with the Junkyard Dog and, after he passed away, Rod Price, under the name Jazzmyn. After wrestling for a year she debuted in ECW as the anonymous black woman in Justin Credible's entourage before breaking out on her own and turning face. She made her PPV debut defeating Jason at ECW Heat Wave 99. She stayed with the company until the end in 2001. After the company died, WWE sent her to their developmental league OVW for more training. She debuted as a Heel in the Six-Pack Challenge for the vacant WWE Women's Title

. She started her first major feud by going after the winner, Trish Stratus.

Jazz would defeat Trish for the title on the February 4, 2002 Raw and successfully defend it by pinning Lita clean in a Triple Threat Match at WrestleMania X8. In a case of Real Life Writes the Plot, and what would become a recurring theme in Jazz's WWE career, she lost the title to Trish after suffering a torn ACL in her knee. Jazz regained the belt from Trish at Backlash 2003. On the June 30, 2003 Raw, there was a Seven-Woman Battle Royal for the title involving Jazz, Ivory, Jacqueline, Trish, Molly Holly, Victoria and the debuting Gail Kim, who won. Jazz was the first eliminated, because she had suffered a chipped and dislocated shoulder. She was used much less once she returned, mainly as a manager for Rodney Mack (her Real Life husband, though their relationship was never acknowledged on-screen.) WWE released her in November 2004 supposedly due to a lack of ideas for her. She went to IWA Japan before returning to the USA independent circuit, particularly NWA Cyberspace, until WWE called her in 2006 for WWECW. Aside from one match against then-Champion Mickie James on the ECW vs. WWE: Head to Head special though, she did not have any kind of onscreen role, and she and Rodney Mack were released again in 2007. She went to France for the Fighting Spirit Federation and Queens Of Chaos before returning to the USA independent circuit. Among the various promotions Jazz has competed for, she has also had some standout rolls SHIMMER's sister promotion SHINE

During Jazz's first reign as WWF Women's Champion, there was an effort to "get the F out" meaning she's technically the first to hold both the WWF and WWE belts. Jazz has also held NWA Cyberspace Women's Title, The Women's Extreme Wrestling World Title, half of WSU's Tag Team Titles, Universal Championship Wrestling's Women's Title, Downsouth Championship Wrestling's Louisiana State Title and the NWA World Women's Title belt. She was inducted into the WSU Hall of Fame in 2010 and the Texas Wrestling Hall of Fame in 2012.