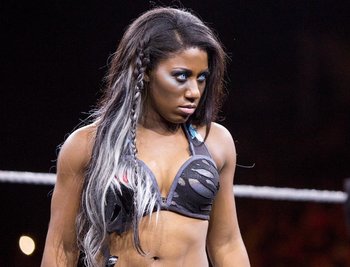 She first trained under Skandar Akbar and Booker T, competing on the Texas independent as Athena, where she got into a lot of trouble because of her big mouth, to the point she was billed as "Trouble" for two straight years in Booker T's PWA. However as she grew as a wrestler and attraction she once again became more familiar to fans under the name Athena, even dubbing herself 'The Wrestling Goddess'. Companies that had closed their doors on Athena such as Anarchy Championship Wrestling and IWA Texas started opening their doors to Athena again, SHIMMER invited her over for a tryout in 2010, only decide to debut right away, with rival enterprise WSU following suit the following year. The year 2012 was very kind to her — featuring debuts at Northern Championship Wrestling Femme Fatales, All American Wrestling and Shine Wrestling. She quickly drew lots of talk for her notable finisher — a diving stunner from the top rope, named the 'O-Face'.

As WWE slowly took a renewed interest in women's wrestling and with Athena being noted as having the 'Diva Look', fans started to wonder if the promotion would ever come calling. They finally did in 2015, though it took another year to christened her Ember Moon, give her a contract and debuted at NXT Takeover Brooklyn II, though it was a victorious effort against Billie Kay. In November 2017 she became the NXT Women's Champion. She lost the title at NXT Takeover New Orleans and debuted on RAW the following Monday. After an underwhelming run on the main roster she was sent back down to NXT, then release in the November 5th 2021 round of talent cuts.

At the Double or Nothing pay-per-view event in May 2022, Athena made her debut for All Elite Wrestling.

"Let's just call it what it is! I'm sexy. You know it. And I know you know it."
"I can be kinda spoiled at times, but for the most part I think I'm better than everyone else. I'm the best thing that has happened to every promotion I've been to! I love it when the fans go crazy for me."