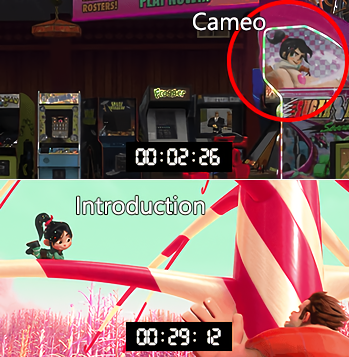 An Early-Bird Cameo is when characters appear earlier than their proper introduction in the same work or continuity.

Such a cameo is superficially similar to the Chekhov's Gunman with the difference being that the Gunman's introduction later in the work coincides with them becoming a plot-resolver while an Early-Bird Cameo is more along the lines of 'Bob appears in the background in chapter 1 yet joins the main cast only in chapter 5'.

An Early-Bird Cameo can come in different flavors. Either the character has their cameo without any actual characterization or they get a small role as themselves (including characterization) before their main role — for example, being a side villain in one film and the Big Bad of its sequel. There is also the habit of studios to promote new characters of an upcoming release by letting them cameo at the end of a work which is called a "Sneak Peek".

Compare this trope with:

While sneaking past the windows in the museum, you can catch a glimpse of Le Paradox, Toothpick and Decibel's silhouettes discussing their Evil Plan.

While sneaking past the windows in the museum, you can catch a glimpse of Le Paradox, Toothpick and Decibel's silhouettes discussing their Evil Plan.