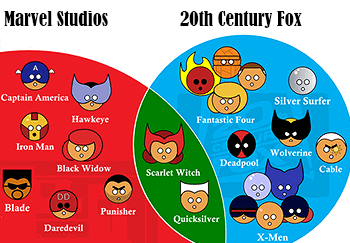 ◊ and an update.

"Hello, kids! HERBIE the robot here. A lot of you are probably wondering why I'm on this show instead of the Human Torch. Well, keep wondering, because I'm not telling!"
— A Marvel Mash-Up spoof of The Fantastic Four (1978)
Advertisement:

Generally when there's a group of works that are all set in the same continuity, characters can (and do) crossover from their home series to other ones fairly freely. Sometimes, however, within The 'Verse, there are Canon characters which, for whatever reason, can't be used in any other work outside of their "home" series. These characters are Exiled from Continuity. Although they're most frequently found in Comics (especially superhero comics), such characters can also be found in other forms of media. Such characters inspire many a writer to create a Captain Ersatz or an Expy for the character they can't officially use or to try to skirt the issue with a Lawyer-Friendly Cameo.

May be a result of either Executive Meddling or Screwed by the Lawyers.