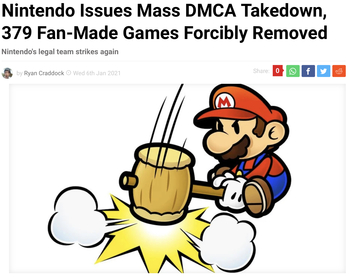 "Let's-a ban!"
"Reactions of character creators to fanfiction have been varied, from polite acknowledgement to legal threats to having their character discuss out loud how disturbing and weird some types of fanfiction are. Fans reacted to all of these things by writing 9,000,000 new fanfics."
— Cracked, "Fanfiction"

Some creators don't like Fan Work and actively discourage — if not outright prevent — fans from creating, posting, or publishing their fan work. Although such a ban encompasses all Fan Work, it seems to happen most often to Fan Fiction; hence, most creators who try to enact a fanwork ban tend to be writers.

The reasons for such a ban vary, but it's usually one of these:

In general, a fanwork ban is not a good thing to happen to a fanbase. While it may (but probably won't) accomplish one of the above-stated goals, a fanwork community is one of the most powerful ways to consolidate the fanbase and generate enthusiasm around the work. In extreme cases, it can drastically diminish a fanbase by discouraging them from talking about the work at all on the Internet, meaning that people who discover the work can't connect with other fans of the work (or run into massive Flame Wars about the fanwork ban).

Contrast with Approval of God and Staff-Created Fan Work, compare and contrast Oh, Crap, There Are Fanfics of Us! (which is when the characters react with alarm to the existence of fan content) and see also Rule 34 – Creator Reactions. This is often tongue-in-cheek, and rarely done by creators who aren't actually fine with it.

Examples of authors who have imposed fanwork bans/restrictions: