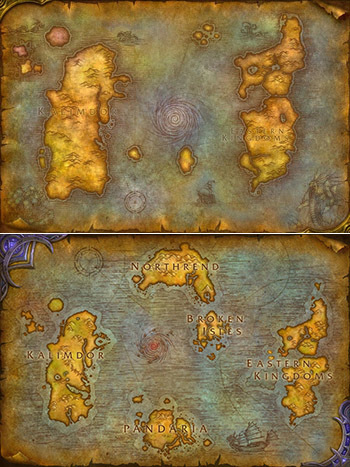 You'd think they'd have remembered to map that the first time around.note  Top: Map of Azeroth, as of the first World of Warcraft expansion pack (The Burning Crusade). Bottom: Map of Azeroth, as of the sixth expansion pack (Legion).
It's a simple and well received story - the main characters have explored a vast and magical realm, with limitless borders, fantastical races, and did we mention limitless borders?
Advertisement:

The book was a hit, a veritable smash, and logic dictates that a new one must be penned. But there's a problem — the plot is resolved already. The Ultimate Evil has been destroyed, the tyrant king dethroned, ding-dong the witch is dead. How do you make a new story in this world?

It shouldn't be that hard. A little Hand Waving, a little Retcon, and people won't notice. Use the same heroes for consistency and you can set the sequel in a neighbouring country in the same Magical Land!

This is effectively a Postscript Season for the series, but trying to create new plots from thin air can create inconsistencies. If four humans were all it took to defeat the White Witch in C. S. Lewis's The Lion, the Witch, and the Wardrobe, then how did the neighbouring, human-filled kingdoms of Archenland and Calormen not pose a threat for a hundred years?

If a work was meant to be a one-shot story and they have to expand the universe to make a sequel, they effectively have to weld new kingdoms and landmasses onto the world - adding Backstory never even hinted at in the first book. And if you look close enough, you can see the seams. However, a good series will retcon these cleanly, tying back to the original material, so that we don't notice or care. An even better series will have hinted at them in the first book, either to allow for this possibility, or just to satiate the creator's sheer pleasure in world-building.

Of course, this doesn't just apply to Trapped in Another World plots; it applies to any unexpected hit with its own, original setting, even outside the Speculative Fiction genres.

Compare with Remember the New Guy?, which can be this applied to new characters that logically should have been mentioned before in previous works, but suddenly appear and are treated like they have always been there.