Screwed by the Lawyers 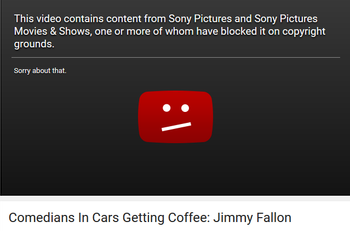 No free Comedians in Cars Getting Coffee episode on YouTube for you!
"Hey, hey, kids! Your old pal Krusty is going to teach you five new words: unlicensed use of my image!"
— Krusty the Clown, The Simpsons ("Treehouse of Horror XIX")
Advertisement:

Copyright and Trademark law have gotten in the way of or forced cancellation for many works. No matter how promising, popular or profitable a show is, it's still apt to get canceled if it would be illegal to keep broadcasting. This can be prone to myopic moments on the part of the owner of the intellectual property in question, since if it's that profitable, it makes sense to license the work rather than shut it down, unless of course the artist is Doing It for the Art.

Fans may have to Keep Circulating the Tapes if legal troubles also forbid a home release, or force the official release of an altered version. A Real Song Theme Tune might be replaced with a generic theme due to the need for both the rights to the actual song and the rights for the recording itself. TV stations have blanket licenses, but these rights have to be cleared for release on home media. Songwriters and performers might want more money, and the studio might not be willing to pay for it. Scenes might be edited out after legal objections for various reasons.

Sometimes, the reason why a trademark is so zealously protected is because the holder wants to prevent it from entering common use as a generic term, which would cause them to lose it. This has happened with Aspirin (once a Bayer trademark, they lost it in many countries after World War I), Cellophane, and other "genericized" trademarks. It's also why most productions bend over backwards to make sure that Real Life product names are not mentioned at all (unless as Product Placement), and certainly never as generics. But note that this only applies to trademarks, not to copyrights. Additionally, note that (contrary to the common misunderstanding of this law) a company is never legally required to protect a trademark in order to keep it—they don't lose it simply for failing to protect it; they only lose it if it enters common use as a generic term to the point where it is no longer trademarkable. It can, however, weaken future court arguments if the defendant is able to say "Well they didn't intervene with Case X, so why are they suing me?"

The Other Wiki refers to this as the tragedy of the anticommons,

where the existence of competing rights holders—not just in copyright, but also in patent law,note Where it's a very serious problem, since technology is iterative; many companies are highly annoyed by the "patent thicket" keeping them from developing new software and (especially) new smartphones, since so much is patented and they can't build on current without stepping on a patent or two or two hundred. However, no company has an incentive to end the thicket, since they regard their patents as leverage against others. Then there are the patent trolls who buy up patents solely to start lawsuits. land ownership,note Most often when someone has a big project and needs to buy up a bunch of lots, giving landowners an incentive to hold out for a higher payday leasing rights and other areas—frustrates achieving a socially desirable outcome. To further complicate matters, organizations of all kinds try as hard as possible to blur the lines between copyrights, patents, and trademarks in their favour.

Related to Screwed by the Network. May be why No Origin Stories Allowed happens.

Alternative Title(s): Cease And Desist, Other