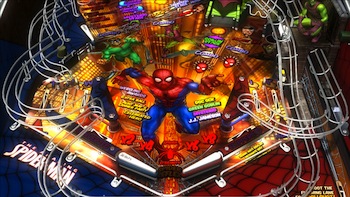 Spider-Man is a Digital Pinball Table released in 2010 by Zen Studios for their Pinball FX and Zen Pinball frameworks. As Spider-Man, the player must face off against four of his enemies: Doctor Octopus, the Green Goblin, Mysterio, and J. Jonah Jameson. Challenge each villain by activating their mission, then defeat all four of them to activate Clone Chaos multiball.
Advertisement:

Unlike most other Zen Studio pinball tables, Spider-Man is not available for some of the Zen Pinball frameworks due to licensing issues between Marvel Comics and Sony. Instead, on those platforms, the table is only available from a dedicated "Marvel Pinball" app, while the Nintendo 3DS Marvel Pinball set replaces it with the one themed on Fantastic Four. Then again, many players consider the table to be one of the easiest ones in Zen's stable, as it is fairly easy to light kickbacks and get extra balls just by repeatedly hitting a few loops.