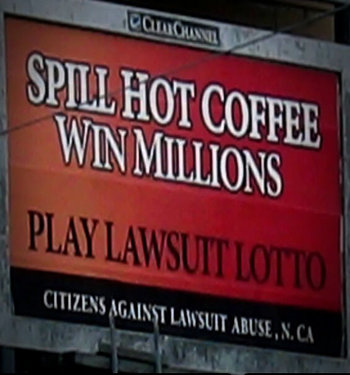 Wait, third-degree burns cost how much to treat?
"I sued Verizon, 'cause I get all depressed any time my cell phone is roaming.
I sued Colorado, 'cause you know, I think it looks a little bit too much like Wyoming!
I sued Neiman Marcus, 'cause they put up their Christmas decorations way out of season.
I sued Ben Affleck ... aww, do I even need a reason?!"
— "Weird Al" Yankovic, "I'll Sue Ya"

Alice is idling her car out of the driveway when she accidentally bumps into a stranger, Bob. "Ow, my back!" Bob exclaims. "The pain is immeasurable! I'll sue you! I'll sue!"

Someone — usually a stranger, sometimes a friend, occasionally an enemy — has decided to sue Alice in the wake of some minor accident. The plaintiff suffered no real injury, but is suing out of greed, a desire for revenge, or is simply desperate for justice, often with the help of an Ambulance Chaser or otherwise Amoral Attorney. If the judge doesn't laugh the guy out of court, though, our hero must often resort to some variety of Courtroom Antic to discredit her adversary.

The classic sitcom lawsuit is almost always a tort action: the plaintiff is claiming the defendant's negligence harmed them in some way, and is demanding monetary compensation. The actual injury sustained is always minuscule and the amount of damages claimed has to be at least five times what the hero earns in a year. The complaint itself is often just plain silly, such as suing Pizza Building because the X-Treme Meatsa-Treatsaria did not truly deliver "gut-busting meat flavor" as promised.note "The meat flavor left my gut completely intact, your honor!"

Technically, a frivolous lawsuit is one brought in bad faith — i.e., brought with no intention, expectation, or chance of success. Within the legal system, calling an action frivolous is like calling the lawyer who brought it a certified loon, the legal equivalent of "not even wrong". Much more common are frivolous claims in otherwise reasonable lawsuits and frivolous courtroom motions that only serve to prolong the legal process and harass participants. Another common instance is the lawsuit that, while it is technically not frivolous because it is based on actionable legal fact, said actionable legal fact is hair-splitting, petty, and a Violation of Common Sense (e.g. a ten million dollar suit filed against a restaurant for not putting ketchup on a burger advertised as having ketchup on it — it is technically false advertisingnote In which the product you describe must accurately fit the product you sell, unless adequately disclaimed or clearly exaggerated and therefore legally factual and actionable,note It is also theoretically actionable under sales law, which is somewhat different from the false advertising laws; note that because the sale of a hamburger is a sale of goods and the purchaser of the hamburger is the end user (rather than a commercial reseller), the perfect tender rule

applies: if the seller's product diverges one iota from what the buyer can reasonably expect based on the seller's representations, the buyer is entitled to damages and to return the product. That said, you do have to return it in salable condition, i.e. intact, not with bites taken out, so this is purely theoretical unless you open your burger before eating it and also are enough of a dick to sue when you find no ketchup instead of going up to the counter and just asking for it. Even then, the seller will be able to argue — possibly successfully — that because you touched the burger you got whatever bugs or dirt you may have had on your hands on the burger, therefore making the sandwich no longer fit for resale and thus denying you that remedy. Additionally, although (again) you are technically entitled to damages, you are limited to the value of the burger as if it had been as warranted (which would be the amount you paid for it, at most) minus the value as delivered (without ketchup, so at much a few cents lower — ketchup is cheap), making it impossible to recover very much — less than the cost of filing a lawsuit in the first place. but is the lack of a free packet of ketchup you could apply yourself worth ten million dollars?).

The majority of the truly outrageous examples you might have heard of are filed pro se, without an attorney. That's because none want to touch the craziness with a ten-foot pole. If there's an actual attorney involved who isn't also their own clientnote "A man who is his own attorney has A Fool for a Client." the case might not be so frivolous as it first appears. This is particularly common in personal injury, where "only paid if you win" is the standard; the prospect of eating the cost of an unsuccessful case forces attorneys to be very selective about the cases they take, ergo they're not going to take something unless they have very good reason to believe that it will be determined in their favor.

Finally, yet another common lawsuit confused with the Frivolous Lawsuit that may or may not be technically frivolous is the SLAPP — Strategic Lawsuit Against Public Participation

, used to censor or intimidate people into withdrawing truthful accusations/statements, not releasing proof of corruption/wrongdoing, or otherwise silencing people. The Church of Scientology is absolutely notorious for this practice (to the point that almost all parodies of it include it), and it's often a favored tactic of the Corrupt Corporate Executive and the occasional celebrity caught in major wrongdoing, where it may overlap with the Streisand Effect.

Under Federal Rule of Civil Procedure 11(b) or its equivalent in a court system that has one, anyone signing a paper to be filed in court is representing to the court that they have made "an inquiry reasonable under the circumstances...." Violation of Rule 11(b) can lead to sanctions, either upon motion by the other party or on the court's own initiative.

In real life, actual frivolous lawsuits will be over long before they get near an actual jury. Repeated filing of frivolous lawsuits, frivolous claims, and frivolous motions will often be met with "contempt of court" charges. Moreover, attorneys have been disbarred for excessive frivolous filings (granted, it takes a long history of accepting worthless cases, making pointless and abusive appeals, and generally pissing everyone off to make them even consider it; bar associations are fairly reluctant to go that far and will never jump straight to disbarment before making use of letters of reprimand, sanctions, and suspensions first, not to mention the benchslaps that these attorneys will invariably receive from pissed-off judges).

Likewise, litigants known for repeatedly bringing them can be labeled by the courts as "vexatious" and enjoined from ever filing another without getting court approval first (like disbarment, you really have to fuck up before they'll even consider labeling you as vexatious due to a general reluctance to keep someone from having their day in court. It takes a whole lot of abusive, ridiculous claims, worthless appeals, bad courtroom behavior, unpaid fines, and general egregious misbehavior to get them to even think about forcing you to permanently leave them alone). Even if none of this happens, the case (and others like it) can be banned from itself ever being filed again, at least in both the US and Japanese court systems, if it is summarily dismissed with prejudicenote Dismissal "with prejudice" simply means that as a matter of law, what you say in your complaint can't actually be used as the basis of a lawsuit. This is the usual way in which many lawsuits end for entirely non-frivolous reasons: if you're trying out a legitimate but untested legal theory, or if it turns out that the defendants have a defense of which you were unaware or which you were aware but weren't counting on the judge buying so quickly, your case will be dismissed with prejudice and there's no shame in it. which may or may not go as far as the judge calling it frivolous, but is a strong warning to the parties and lawyers involved that trying it or a similar case again will put them at risk of the more severe consequences such as contempt charges, disbarring for attorneys involved, and the like.

Also note that the few seemingly flimsy cases that do make it into the courtroom sometimes has the real story being quite different to what you or the general public know, thanks either to the media omitting a few key details that makes the case valid or the story being subject to a proverbial game of telephone. A few of these are discussed in the Real Life section of this trope.

Finally, Frivolous Lawsuits are the menace of those countries and judicial systems that follow the common law or which follow the judicial sources literally. They are less an issue in those countries which follow the civil law, such as Romano-German judicial system. In several countries, the judge can dismiss a lawsuit completely if he or she sees it as a pointless, frivolous, or as an attempt to abuse the judicial system. This is known in the Romano-German system as prohibition of vexatious litigation: law may not be used to cause harm to someone. Abuse of legal rights was prohibited already in the 1734 law in Sweden.

Often this trope is invoked to make an argument about Tort Reform, i.e. limiting the ability to file claims or capping the liable amount of damages. On the one hand, everyone can agree that there sure seem to be a lot of unnecessary cases brought to court, which takes up both time and money that can be better spent. On the other hand, it's hard to argue that the mere fact that someone with an illegitimate claim asks for a ludicrous amount of money means that someone with a legitimate claim should have their legal recourse limited. Particularly since — in the United States at least — most defendants in tort cases insist on a jury trial, and the jury is responsible both for determining fault and deciding the number of damages to award (if any). Furthermore, many 'outrageous' jury awards are reduced following the inevitable appeal, and highball demands are usually more of a bargaining tactic than anything - they're not expecting that to be the actual award, they're just starting extremely high so that they can negotiate down to the ballpark of what they actually want. In cases where the plaintiff does technically have a legitimate cause of action that is also ridiculously petty and of infinitesimal value, the judge can choose to grant a nominal award, which is a pittance that mostly stands to say "you win, here's a cookie, now get the hell out of my courtroom".

Subtrope of Hilarity Sues. A lawyer who goes after tort claims is called an Ambulance Chaser. See Staged Pedestrian Accident when the accident is invoked to scam people.

This song by Weird Al is about someone suing companies for things that are largely his own fault.

This song by Weird Al is about someone suing companies for things that are largely his own fault.