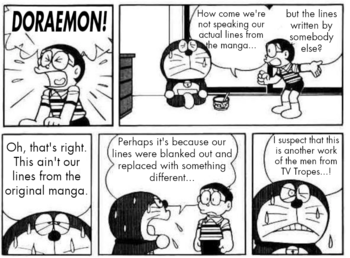 We had nothing to do with this. We swear.
Advertisement:

Remix comics are to comics as Gag Dubs and Gag Subs are to film and animation.

From another perspective, as the Stick-Figure Comic and Sprite Comic tropes show, being unable to draw is not an impediment to pushing your own brand of funny on the world. Thanks to the Remix Comic, neither is the inability to come up with your own characters.

Remix comics can be as simple as taking a frame or frames from your favourite webcomic, blanking out the speech bubbles in MS Paint and overwriting them with new text. They can also be made from scans of printed comics.

Sometimes, alterations to the actual images can also be made. These can range from simple things like changing the expression on someone's face, to reordering frames or even inserting entire new characters, possibly from other media entirely.

Copyright issues may interfere with distribution of remixes. However, some webcomickers are experimenting with Creative Commons

licenses that enable them to explicitly allow a specific level of reuse, such as non-commercial derivative works that give attribution to them. Of course, comic writers and artists can also remix their own creations.

Usually remixes are made by fans. They are also known as Strip Slaying, Rescripting or Fanmixing.

Examples (organized by the medium of the original material)