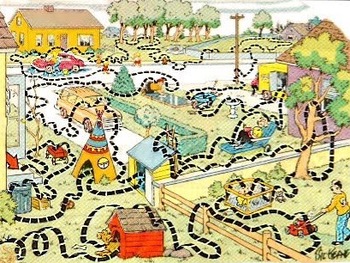 Billy likes to wander a lot.
Todd Gaines: There you are, enjoying your comics, when all of a sudden there's The Family Circus just waiting to suck, and ruin your whole experience.
Claire: Then why don't you just not read it?
Todd Gaines: I hate it, but I'm compelled to read it.
—Dialogue from the film Go

Bil Keane's The Family Circus (originally The Family Circle) is a long running (since 1960) Newspaper Comic about the innocent childhood adventures of young siblings Billy, Dolly, Jeffy, and infant P.J. Occasionally, parents Bil and Thel will contribute some insightful comment about the children's exploits, like when they all were imitating Wayne's World and Bil says: "Makes sense to me. NOT!!"

Other characters include random neighbor children, pets, extended family members (many of whom are dead), and various ghosts representing childhood excuses. A standard Family Circus trope is for a parent to ask the children who broke something, only for them all to say: "not me"... Just as a ghost named "Not Me" flees the scene, damning evidence of the crime in hand.

Family Circus Sunday strips are notable for generally sticking to the single-panel format of the weekday version, albeit far more elaborately drawn. Some of these Sunday strips have a gimmick where, through the usage of a dotted line arrow, you can see the path taken by Billy or another of the Keane children, through a heavily detailed map of a neighborhood, usually done to show how kids can get distracted why running simple errands. The 1990's added another set of themed strips ("It's Apparent You're a Parent"), which expands the Sunday strip to multi panel (or in this case, circle) format to showcase how parenthood, through Bil and Thel, affects their everyday lives when dealing with their fellow adults.

Occassionally, the strip will go on a week long "hiatus" as Bil Keane allowed his then young son, and later his grandson, to contribute rather crudely drawn "fill-in" strips when their father and grandfather needs to take a breather from work.

Besides little kids, the sincere fanbase for the comic consists of parents and grandparents who love the domestic slice-of-life humor of writers like the late Erma Bombeck; in fact, she and Keane were friends. One of Keane's sons, Glen, became a top animator at Disney (where he was the lead character animator for Ariel, the Beast, Pocahontas and John Silver, among others). Another son, Jeff, began assisting his dad with the comic in the 2000's, and has taken over following Bil's death in November 2011.

While it's ostensibly a humorous comic strip with a wide circulation, The Family Circus has been more popular as the butt of jokes at least since The '90s.

A Live-Action Adaptation film is planned for the future.

Since this series has both a passionate fandom and a passionate hatedom, Rule of Cautious Editing Judgment is in full effect.