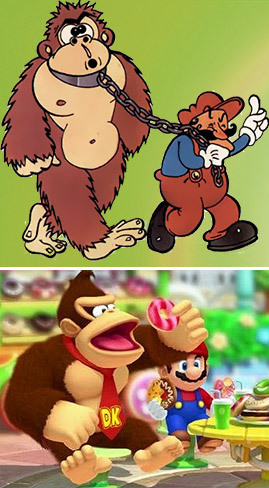 Nothing solves a past of animal abuse better than donut parties.note Although to be fair, the first gorilla was his (grand)father.
Aoi Asahina: What the heck's happened to you...? You weren't like this from the beginning, you know.
Yasuhiro Hagakure: Well, back then my personality hadn't quite solidified yet...!
— Danganronpa: Trigger Happy Havoc

When a series starts out, the characters usually don't have firmly established personalities or appearance since the writers are just getting a feel for them. Time goes on, more and more episodes are produced, and the characters become better defined with their own set of personality and behavioral quirks. Or maybe their early personality gradually gave way to something very different due to Character Development and/or Flanderization. Whatever the case may be, though, their early incarnations are forgotten about as people look at the firmly established characterization.

In extreme cases, a character's actions in early instances of a work can actively contradict their later, established behavior. For examples, early adventures of the noted Technical Pacifist Batman end with him openly killing criminals. This is a subtrope of Early Installment Weirdness.

A form of Continuity Drift. Compare the Out-of-Character Moment and Depending on the Writer, or Flanderization where a single trait gets largely exaggerated until it's all the character is known for. When the characterization is already firmly established, but still ends up changing to something completely different for unexplained reasons, then this is Character Derailment.

See also Character Check, when the writers abruptly remember that the character started out as different, and give him a few scenes where he acts like he used to, if only temporarily.