Literature / Dorothy and the Wizard in Oz 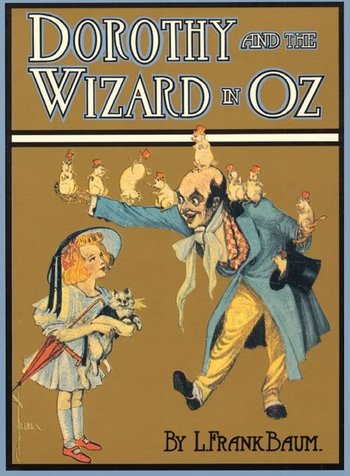 Not a bad man, just a bad wizard.
Advertisement:

Dorothy and the Wizard in Oz is the fourth book set in the Land of Oz written by L. Frank Baum and illustrated by John R. Neill. It was published on June 18, 1908 and reunites Dorothy with the humbug Wizard from The Wonderful Wizard of Oz (1900). Baum, having resigned himself to writing a series of Oz books, set up elements of this book in the prior Ozma of Oz (1907). He was not entirely pleased with this, as the introduction opens with the protest that he knows many tales of many lands, and hoped that children would permit him to tell them those tales.

hits and she, her kitten Eureka, and Zeb's horse and buggy fall into a crack in the Earth and slowly descend into a city populated by the vegetable-like Mangaboo people. They are soon joined by the Wizard himself, who coincidentally falls into the same crack via his hot air balloon, and the group must escape the wrath of the Mangaboos, and later, the various other perils and hostile creatures that live under the Earth's surface, while coping with the bizarre way the laws of physics apply the further to the center of the Earth one gets. Very little of the book takes place in Oz until the later chapters.

Not to be confused with Dorothy and the Wizard of Oz, the 2017 animated series.

Alternative Title(s): Dorothy And The Wizard Of Oz