Western Animation / Dorothy and the Wizard of Oz 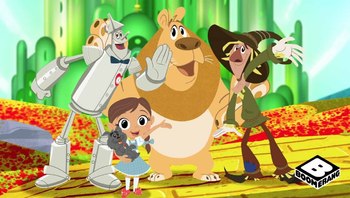 Dorothy and the Wizard of Oz is an animated series based on Land of Oz (and its more famous film adaption) that debuted on Boomerang's streaming service in the United States on June 29, 2017 and is seen on all international Boomerang channels.

Dorothy now serves as princess of Emerald City underneath Queen Ozma. Along with Scarecrow, Tin Man, and the Lion, Dorothy will go on plenty of adventures having plenty of fun, encountering many characters from the original Oz books, and learning about things like friendship and community.

Tropes pertaining to the series: