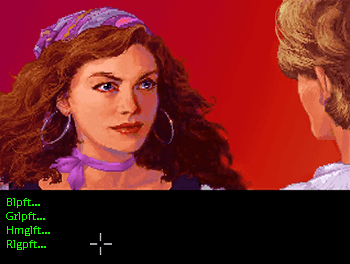 Does this count as a Romance language?
Calvin: What's it like to fall in love?
Hobbes: Well... say the object of your affection walks by... First, your heart falls into your stomach and splashes your innards. All the moisture makes you sweat profusely. This condensation shorts the circuits to your brain, and you get all woozy. When your brain burns out altogether, your mouth disengages and you babble like a cretin until she leaves.
— Calvin and Hobbes
Advertisement:

Bob sits at a booth in a pub, looking around. Everyone seems to have someone to talk to, and he spots Alice at the bar. Putting on his best smile, he heads over, desperate to just make some conversation.

And then Alice turns around. The screen goes soft and hazy, romantic music starts up. Bob is amazed and realizes that this may well be the single most momentous thing to happen in his life. He imagines minivans. He imagines children. Even a little white picket fence.

Bob opens his mouth and says a romantic "Lemons are very nice, especially in the summertime."

He has been struck by gibberish of love. Sometimes caused by Distracted by the Sexy or a Head-Turning Beauty, it doesn't even have to be a sentence using word —plain noises work just as well. Occasionally happens if Twice Shy-style love interests attempt conversation. If the man is The Charmer—or even The Casanova—it often indicates Ladykiller in Love; sincerity of feeling kills his fluency dead.

When the gibberish is coherent, but unfortunate, they're often Digging Themselves Deeper afterward. If they're struck utterly dumb, they Cannot Talk to Women. Usually male, and often happens to Endearingly Dorky characters. Sometimes immediately lampshaded with something along the lines of "X... smooth...". May also be a habit of the Shrinking Violet.

Subtrope of Emotionally Tongue-Tied. Compare Love Makes You Dumb and Love Makes You Crazy. Compare and contrast Angrish. May lead to Even the Subtitler Is Stumped. May overlap with Thinks of Something Smart, Says Something Stupid. See also I "Uh" You, Too (for when the relationship's evolved a bit before the gibberish), Cannot Spit It Out, and Crush Blush. Has definite overlaps with Tongue-Tied.