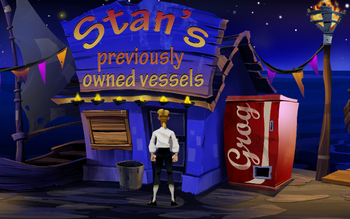 Age of Sail-era vending machine, owned by a used boat salesman. Just wait until you get to the amusement park!
Diabetes: Are we in ancient times?
Woman: Can't you tell by what you're wearing?
— God by Woody Allen
Advertisement:

When writers attempt to set a story in a vaguely historical time period, but don't do their homework, an Anachronism Stew can arise—cities, people, inventions, and terms get thrown around in places they're entirely inappropriate. While an ordinary person won't notice them, someone interested in history will have their Willing Suspension of Disbelief shattered to pieces.

However, sometimes, telling a story (or just being funny) is more important than being historically accurate. So while a story may theoretically be set in, say, ancient Peru, you'll find truck stops, people slipping on over-waxed floors, Lawyer Friendly Boy Scouts, period-appropriate signage, and who knows what else. A bit like Present-Day Past, only applied to the whole of history— liberally and without remorse for all those poor history majors. While an Anachronism Stew can be pretty subtle if you don't pay attention in history class— "Hey! They didn't call it the Caribbean during the 1600s!"— a Purely Aesthetic Era is blatant and intentional. It may be Hand Waved with an Alternate History, but most folks don't even try to explain it; any attempt at it would likely not make sense in context anyway.

It's funny and cool. Don't question it and just relax.

Stone Punk is typically a subtrope of this.

Contrast Decade Dissonance, where it's ostensibly done on purpose by the inhabitants. Compare Retro Universe, where the setting technically is the present day or close, but with the aesthetic stylings (and sometimes some of the technology) of the past.