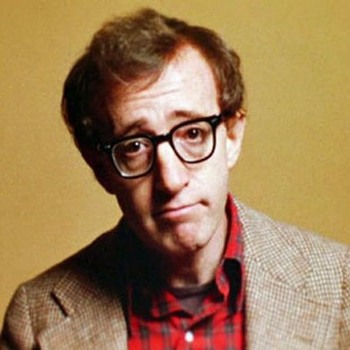 Heywood "Woody" Allen (born Allan Stewart Konigsberg; December 1, 1935) is an American film director, screenwriter, actor, comedian, short story writer, essayist, playwright, and musician. He was born into an Ashkenazi Jewish family in New York City; not coincidentally, most of his films are set in the Big Apple and feature Jewish and/or Ambiguously Jewish characters, frequently with himself or an Author Avatar in the lead role.

His childhood wasn't particularly happy, and so he began writing dark-tinged humor — and was already selling the occasional joke by his mid-teens. At seventeen, he entered NYU and the City College, but was quickly expelled. He started to write scripts to shows like The Tonight Show, appeared in Candid Camera segments like when he had temp secretaries dictating a love letter, and doing Recorded and Stand-Up Comedy exaggerating his own traits. He's never stopped, though the medium, and eventually the Author Avatar, has varied. Among other traits, his character is nearly always a Sickly Neurotic Geek, and full of Jewish Complaining.

He started directing movies in 1965. Since then, he has directed nearly movies that range from Screwball Comedy to Drama. He was nominated for an Academy Award twenty-four times, including a record fifteen nominations for Best Screenplay. He has won four Academy Awards — three for Best Screenplay (Annie Hall; Hannah and Her Sisters and Midnight in Paris) and one for Best Director (Annie Hall). His Annie Hall famously beat Star Wars for the Best Picture Oscar. Allen himself is not really interested in awards; he showed up at the Oscars ceremony only once in 2002, when he encouraged producers to continue filming their movies in New York after 9/11.

The soundtracks of his movies tend to be jazz music and old (as in 1920s-'30s-'40s) standards, no matter when or where the film is set. He did write a musical once, Everyone Says I Love You, but the songs are all lifted directly from that era.

He's undergone psychoanalysis for 30 years. Exactly what good it's doing, no one knows, but his experience with psychiatrists has made its way into numerous works.

He's also notorious for being a heavy womanizer as well as an accused child molester. He has been involved with Harlene Rosen, Louise Lasser, Diane Keaton, Stacey Nelkin, Mia Farrow — and Soon-Yi Previn. Woody had adopted Dylan and Moses Farrow, two of Mia's adopted children, and would go on to engage in an affair with Mia's other adopted daughter Soon-Yi when she was 19, resulting in an outcry and a bitter legal battle that to this day defines his image. He has also been accused of sexually assaulting his adoptive daughter Dylan Farrow when she was seven. Dylan has since maintained for decades that this had happened, while Allen denies it. His other adopted child

, Moses Farrow, has since parted ways with Mia Farrow and befriended Woody, whom he insists is innocent. Meanwhile, Allen's son with Farrow, Ronan Farrow, supports Dylan and Mia and denounces Woody. Ronan would also later become famous for his investigative journalism work in uncovering sexual abuse allegations in Hollywood.

Naturally, almost every single plotline of Allen's scripts is about sex, adultery and relationships.

He also plays the clarinet and has written humorous essays and short stories. (There's one about Count Dracula who finds what looks like a perfect lunch — only to find out he woke up during a solar eclipse. And the apartment is Danish modern with no shades.)

While his films from the '70s and '80s are all almost universally loved by fans, his '90s films and (especially) his output since the Turn of the Millennium have gotten far more of a mixed response from critics and audiences, with some pictures (Match Point, Vicky Cristina Barcelona, Midnight in Paris, Blue Jasmine) receiving high praise and others (The Curse of the Jade Scorpion, Hollywood Ending, Anything Else, Melinda and Melinda) being not well thought of by most. It should be noted, however, that even the most critically-derided of his films still tend to have a few fans here and there.

A somewhat abridged list of his movies is presented here:

Tropes common to his work include:

Example of:
So Long, Suckers!