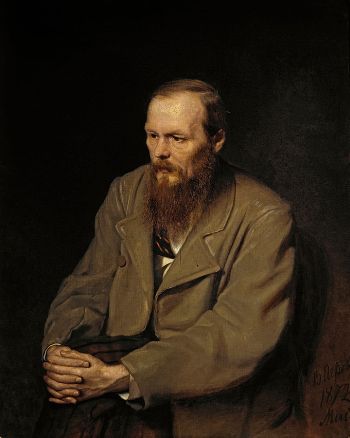 "What terrible tragedies realism inflicts on people."
— from The Brothers Karamazov
Advertisement:

Fyodor Mikhailovich Dostoevsky (Russian: Фёдор Миха́йлович Достое́вский; 11 November 1821 – 9 February 1881) was a 19th century Russian author, famous for writing Notes from Underground, Crime and Punishment, The Idiot, and The Brothers Karamazov. He was famous for his rather dark stories, filled with violent, self-destructive characters driven by ideas and strong passions, his intense, psychologically driven character studies, as well as the rich philosophical and religious themes of his works, which is credited by many for anticipating modernist, existentialist and post-modernist ideas and narratives. Popular in Russia during his lifetime, his works found a global audience after his death, becoming one of the most widely-translated and widely-read great authors, and an influence and inspiration for an endless list of great writers from the late 19th to the early 21st Century.

The funny thing about Dostoevsky is that he's really two different authors separated by a four year stretch of imprisonment and exile to Siberia in 1849. Pre-1849, Dostoevsky wrote two novels (Poor Folk and the incomplete Netochka Nezvanova) and several short stories, including the much-filmed White Nights and novellas. These early stories do anticipate some of his later work, but they are also more humorous, idealistic, and realistic compared to his later works. The Double, his most controversial early story, is now seen as the work that really anticipates his later style. His involvement with a circle of armchair revolutionaries and pamphleteers led him to be rounded up and imprisoned by the state and he was sentenced to be executed by firing squad. At the last moment, right when Dostoevsky was lining up to be killed with his friends, a message of pardon arrived and everyone was sent to prison instead. Biographers consider this a "mock execution", that is none of them were ever going to be killed in the first place but were put through the ringer of being on "Death Row" as a form of psychological torture. One of Dostoevsky's friends went insane as a result of this ordeal. This incident had a phenomenal influence on his life and worldview and the Dostoevsky who returned from prison was a changed man in every sense of the term. Formerly, a kind of liberal interested in applying Western ideas to Russia, he became an anti-Radical Orthodox Christian conservative whose works explored characters who are contradictory, divided and full of neurosis and trauma, much like the author himself.

He's really remembered for the work he turned out after he came back from exile. Having had a religious experience while in prison, he spent the rest of his life exploring themes such as free will, guilt, religious awakening, and the effects of nihilism. His most famous novels are all critically-acclaimed for being thought-provoking explorations of the human condition in the face of suffering and despair, as well as featuring some of the most original and archetypal characters in literary history, such as Raskolnikov, Sonya, Prince Myshkin, Stavrogin and Dimitri and Ivan Karamazov.

If Dostoevsky wasn't the clear "father" of the Psychological Thriller, he certainly set the standard for future practitioners of the genre. In addition, his thematic and philosophical emphases link him strongly to the roots of Film Noir — particularly the appropriately-named Crime and Punishment.

Dostoevsky is known as "the Mad Russian" for two reasons:

Or maybe he was called "the Mad Russian" because the mindgames in his plots are so mind-bendingly complex one has to be mad to understand them. They devote university seminars to studying Dostoevsky's prose, and they can get away with it because the symbolism is real.

Dostoevsky is featured as a character in the novels Summer in Baden-Baden and The Master of Petersburg. A dramatic miniseries about his life aired in 2011 on the Russian television channel Rossiya-1.

Works by Fyodor Dostoevsky with their own trope pages include:

Notable adaptations of his works include:

Other works by Fyodor Dostoevsky provide examples of: