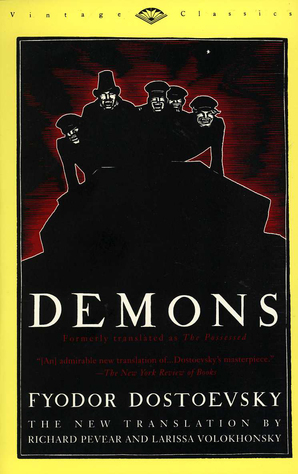 Demons (Бесы, also translated under the titles The Devils and The Possessed) is a novel by Fyodor Dostoevsky. It was first published as a serial in The Russian Messenger in 1871–2.
Advertisement:

Set in a small provincial town, Demons concerns a group of revolutionaries led by Pyotr Verkhovensky who plan to usher a revolution of some sort but explode as a series of personal connections between them weakens discipline, driving Verkhovensky to seek aid from Nikolai Stavrogin, a dissolute liberal nobleman and purported Prodigal Hero who he sees as the charismatic leader who could bind the cause and heal disputes. However, Stavrogin is himself highly schismatic and divided, reeling from secret trauma and is reluctant to take the role Verkhovensky tasks for him.

Drawing inspiration from the trial of Sergei Nechaev and the actions of several nihilist terrorists, Dostoevsky initially intended the book as a political pamphlet but as he wrote the book, he gradually departed from his original idea and devoted himself to exploring his complex cast of characters. The novel was originally published in English and French under the title of The Possessed by which it was known for the majority of the 20th Century, leading to adaptations for the stage by Albert Camus under Les possédés (later adapted for film by Andrezj Wajda). A chapter excised from original publication for its controversial content has since appeared in later editions as an Appendix, titled Stavrogin's Confession which has also been published separately.