The Revolution Will Not Be Vilified 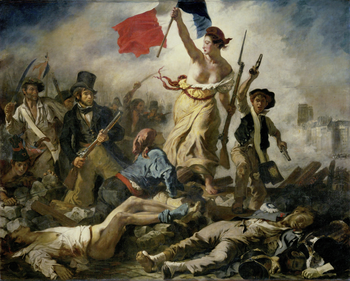 Do you hear the people sing?...
"I am said to be a revolutionist in my sympathies, by birth, by breeding, and by principle. I am always on the side of the revolutionists, because there never was a revolution unless there were some oppressive and intolerable conditions against which to revolute."
— Mark Twainnote Who, if his definition included elite-led secession, would have ironically lived through a counterexample.
Advertisement:

All resistances are against The Empire. Only evil governments provoke rebellion. No matter their hold over information, striking against the authority will never be wrong. In the land of tropes, the revolution will not be vilified. It is always a force for the good, freedom, equality, freedom, justice, freedom, and democracy. And freedom. (For Great Justice, of course.)

This isn't necessarily an unrealistic trope, as rebellions and revolutions almost never happen for no reason at all. They're usually the expression of real (or at least perceived), preexisting problems and grievances, often founded on economic inequality or long-lasting cultural discrimination. Revolutionaries tend to be people who are sick of bad conditions and they're demanding something better, and it's easy to sympathize with them.

For instance, Animal Farm (based on the Russian Revolution) depicts the animals revolting against a corrupt establishment and establishing a new government with new leadership...and then one of the leaders overthrows the other and becomes a murderous tyrant. Oops. Less destructive examples usually involve the revolutionaries breaking into factions, where each faction has a different idea of how to run things now that the old regime has been defeated, and they can't agree on a common plan even if they all have good intentions. This may even lead to a civil war among the revolutionaries.

If things go bad, the new regime may have to confront a lot of pissed-off government workers, businesses, and common folk who didn't want a war in the first place. All that unrest might produce a new crop of revolutionaries...who might just end up repeating the exact same mistakes.

(Try not to confuse "Revolution" and "Rebellion". All revolutions are rebellions against the established order, but all rebellions need not be revolutions. Rebellions are driven mostly in opposition to the existing system without necessarily an idea in place to replace the new regime. Rebellions can even include military and parliamentary coups which are usually not seen as positive examples of this trope. They are also vague, limited in outcome, and yet, ironically, they are generally more spontaneous as expressions and reactions of genuine sentiments than a revolutionary program.)

It goes almost without saying that things taking place in the modern-day country they are made in are as likely to avert this trope as not.

Contrast with Full-Circle Revolution, The Remnant, and the Dark Messiah. See also the related and often confused trope of La Résistance. When the rebels are generally good but hampered by infighting, it's We ARE Struggling Together. For the opposite, when the rebels are anti-heroes or outright villains, see The Revolution Will Not Be Civilized. For the case where the whole conflict really was "civilized" (for better or worse), see Velvet Revolution.

Alternative Title(s): The Revolution Will Not Be Villified