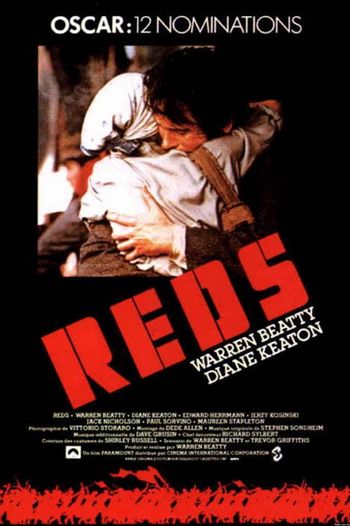 It won 3 Oscars in the end
Advertisement:

Reds is a 1981 American epic film that was co-written, produced, directed by and starred Warren Beatty. It centers on the life and career of John "Jack" Reed, the revolutionary communist, journalist, and writer who chronicled the Russian Revolution in his book Ten Days that Shook the World. Beatty stars in the lead role alongside Diane Keaton, who plays Reed's wife Louise Bryant, Jack Nicholson as Eugene O'Neill, and Maureen Stapleton as Emma Goldman. Stephen Sondheim composed music for the film.

The first half of the film chronicles the early life of Reed and Bryant, their often troubling relationship, and their experiences reporting on the Communist revolution in Russia. The second part of the film takes place shortly after the publication of Ten Days. Inspired by the idealism of the Revolution, Reed attempts to bring the spirit of Communism to the United States, because he is disillusioned with the policies imposed upon Communist Russia by Grigory Zinoviev and the Bolsheviks.

The most significant aspect of the film is a documentary enhancement — interviews with a number of venerable "witnesses", who may have known Reed, whose recollections of the period help to set the scene, bridge transitions and preserve a touching human perspective of these times. To gain perspective on the lives of Reed and Bryant, Beatty began filming the "witnesses" as early as 1971. Some of them are very well known, others less so. It is also noted, on a side note that this movie was released as a sympathetic portrait of a well-known American communist (though it does point out Reed's flaws instead of bordering on Historical Hero Upgrade) in the very same year that Republican Ronald Reagan became president.note Incidentally, the movie was screened at the Reagan White House, with Beatty and Keaton in attendance. Despite their differing political views, Reagan and Beatty were old friends from Reagan's Hollywood days.

The cast has a host of well-known actors in small parts. Paul Sorvino plays Louis Fraina, another American Communist. Gene Hackman pops up in two scenes as Reed's editor. M. Emmet Walsh plays the bellicose speaker at the Liberal Club meeting. Edward Herrmann plays Max Eastman. William Daniels plays Julius Gerber, the guy with the megaphone who tries to kick Reed and the commies out of the Socialist Party.

The film was released on December 4, 1981 to critical acclaim. Despite its political subject matter and limited promotion (mostly by Beatty himself), the film became the tenth highest grossing picture of 1981, taking in $50,000,000 in the United States.

In June 2008, the American Film Institute revealed its "Ten Top Ten" — the best ten films in ten "classic" American film genres — after polling over 1,500 people from the creative community. Reds was acknowledged as the ninth best film in the epic genre.

Example of:
We ARE Struggling Together