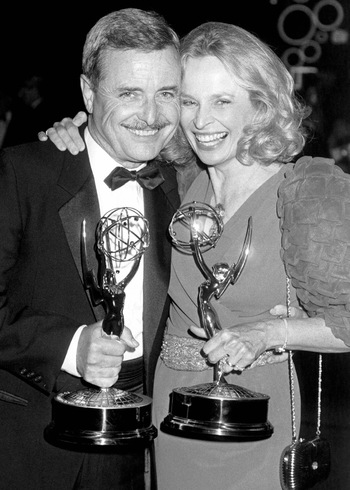 William Daniels and Bonnie Bartlett at the 1986 Emmy Awards.
Advertisement:

William David Daniels (born March 31, 1927 in Brooklyn, New York) is an American actor, best known nowadays for his role as schoolteacher George Feeny on Boy Meets World. He also played Dr. Mark Craig on St. Elsewhere and provided the voice of KITT in Knight Rider. His earliest claim to fame, however, was his role as irascible American revolutionary John Adams in the musical 1776, first on Broadway and then in the film adaptation.

He is easily recognized by his distinctive voice and no-nonsense personality, no matter what character he may be portraying.

Daniels met his wife, Bonnie Bartlett, when they were both freshmen at Northwestern University. They got married almost immediately after graduation, in June 1951, and have been together ever since, making them one of Hollywood's longest-lasting couples. They made Emmy Awards history in 1986, winning Best Actor and Best Actress for their work as Mark and Ellen Craig on St. Elsewhere and becoming only the second married couple to win acting awards on the same night. They also played married or romantically-involved characters on two other occasions; once as guest stars on Touched by an Angel, and again on Boy Meets World, when Bartlett joined the cast as Lila Bolander, Dean of Pennbrook College. The Feeny and Bolander characters began dating and married in the season 6 finale "State of the Unions".