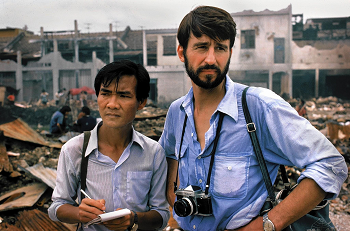 So, you want to tell a story about a real-life event in a remote, exotic location. Say, a revolution in Indonesia, a genocide in Cambodia, or the partition of the Asian subcontinent. Still, you can't make it too exotic, or you will lose your audience. So you give them a protagonist they can relate to, usually a reporter, doctor, tourist, or other plausible visitor from a rich western country. This character is given a story arc of his own that plays out against the backdrop of major world events. He may be taking an active interest in these events, or he may just be trying to live his life without getting involved. Chances are that at some point he will have to make a change, though. He will be made aware of how bad the situation really is, become disillusioned, and/or realise the country is no longer safe for him. This usually precipitates a sequence in the last third of the movie in which the protagonist must escape from Deepest Darkest Africa (or Deepest Darkest Java, Deepest Darkest Indochina, etc.). Alternatively, he may end up Going Native.

The "Foreign Correspondent" acts as a lens through which the audience views the country he is visiting. Done well, this can produce a movie that is both moving and historically informative. Done too much, however, and it creates the impression that stories about foreign countries can only be told when they are seen through the eyes of a foreigner, as though the natives were incapable of telling their own stories.

Subtrope of Lead You Can Relate To and Homegrown Hero.