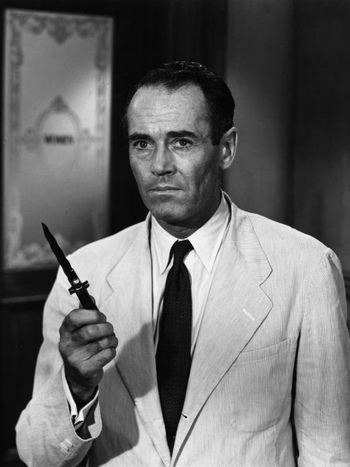 "Henry Fonda one time said that every time he had a job, he thought it was gonna' be the last one."
— Barry Corbin
Advertisement:

His career lasted from 1935 to 1981, where he was in over a hundred films, television programs, theatre productions and various shorts. He received one Academy Award nomination (The Grapes of Wrath) and eventually won one in 1981 for On Golden Pond. Between 1943 and 1946 his career was blank as he had been enlisted in the Navy during World War II. He was also friends with Jimmy Stewart (despite their opposing political views),note Stewart was a hawkish conservative, while Fonda was a vocal supporter of the Democratic Party. They actually once got into a fistfight after they had a political debate, and they made up by vowing never to talk politics again. his former roommate.

In his lifetime, Fonda was typecast as straitlaced yet heroic characters like Tom Joad in The Grapes of Wrath or Juror #8 in 12 Angry Men. His signature role was the beleaguered but sympathetic naval officer in Mister Roberts, which he played for years on stage and later on film. Fonda cemented this image playing Presidents, statesmen, generals and other authority figures in most of his later movies. Ironically, today's audiences probably recognize Fonda from his drastically against-type role in Once Upon a Time in the West as a psychotic gunslinger.

Fonda was married five times. His children from his third wife, Frances Ford Seymour, Jane and Peter, as well as granddaughter Bridget, are also accomplished actors in their own right. Though he often played nice guys in his films in real life he was reportedly very distant and withdrawn from people, even his own children, and by his own admission he was not an ideal parent. Peter recalled breaking in to tears upon hearing Henry praise his acting in an interview as it was the first time he'd ever heard his father praise his work. He died of heart failure on August 12, 1982 at age 77.

Frank kills the McBain family in his introduction scene, including a little boy. While the others were sniped from a distance, Frank goes right up to the boy, and smiles as he pulls out his gun.

Example of:
Death of a Child

Frank kills the McBain family in his introduction scene, including a little boy. While the others were sniped from a distance, Frank goes right up to the boy, and smiles as he pulls out his gun.