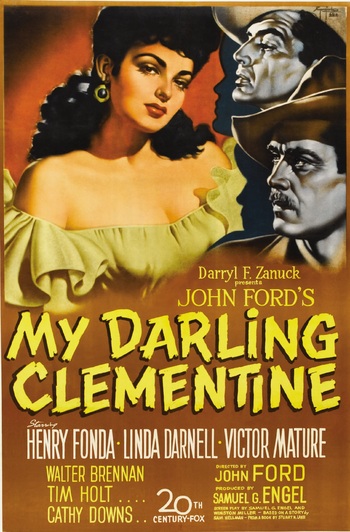 No, that's not Clementine.
"This movie's a classic. It's got the three things that make a movie great: horses, cowboys, and horses."
—Col. Sherman T. Potter describing this film on M*A*S*H
Advertisement:

My Darling Clementine is a 1946 Western directed by John Ford. It is one of many, many film depictions of Wyatt Earp, and the first to be explicitly structured around the shootout at the OK Corral. Henry Fonda stars as Earp, with Victor Mature as Doc Holliday, Linda Darnell as Chihuahua, Walter Brennan as Old Man Clanton, and Cathy Downs as the (historically unattested) title character.

The film opens with ex-lawman Earp working a cattle drive with his brothers. But when his cattle are rustled and his youngest brother killed, he accepts the marshalship of Tombstone in order to investigate and legally avenge these crimes. This sets in motion a ripple of escalating tensions that finally leads him to confront the Clanton family at the OK Corral. Viewers familiar with the film Tombstone or with non-fiction accounts will recognize few particulars of the story, as the facts have been liberally rearranged.

Has nothing to do with the song — which does, however, serve as theme music.