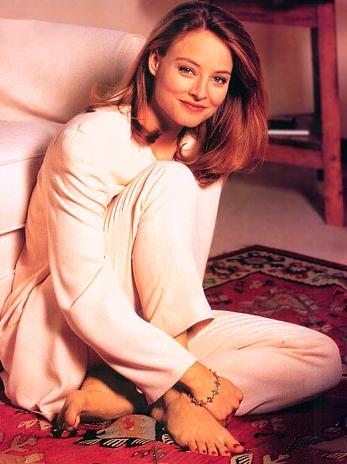 "I've always had this idea that I wanted movies to make people better, not worse."
Advertisement:

More than three decades later — having gained two Best Actress Oscars and two more nominations, a never-ending stream of critical praise and a flawless record as a top box-office draw for her wide releases — Foster is known for playing a wide variety of lead roles in virtually every single genre, including foreign films, films she's directed, indie films, and some of the most popular movies of all time. Her Clarice Starling in The Silence of the Lambs was named the top heroine in American film by the AFI (as well as winning her her second Oscar for a lead role). Her role in Contact led to an asteroid being named in her honour, and at the 70th annual Golden Globe Awards, she received a lifetime achievement award and publicly came out about her sexuality for the first time, while thanking her then-partner Cydney Bernard.

Besides her acting work, Foster has directed four films: Little Man Tate, Home for the Holidays, The Beaver and Money Monster. She also directed two episodes for Orange Is the New Black, one for House of Cards, and one for Black Mirror.

More tragically, she was also the victim of a stalker that eventually escalated into her stalker attempting to assassinate President Ronald Reagan

in 1981 and dedicating it to her. This incident scarred her enough that to this day, interviewers are warned not to bring it up before talking to her, and she's been known to walk off immediately if they ignore that advice. She's only talked about it twice: first, in a 1982 essay for Esquire magazine entitled "Why Me?", and in 1999 on The Charlie Rose Show.

In general, Foster is very secretive about her private life; she gave birth to two sons but has not revealed the identity of the children's father(s), and as mentioned above, took until 2013 to come out of the closet about being in relationships with women. In 2014, she married actor and photographer Alexandra Hedison.

Tropes and trivia about her works: