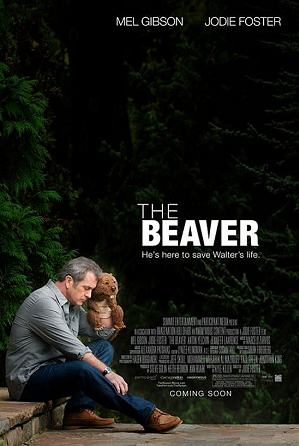 The Beaver is a 2011 film directed by Jodie Foster about Walter Black (Mel Gibson), a depressed father and CEO of a toy company who has been kicked out of the house, and finds a beaver hand puppet in the dumpster. After a failed suicide attempt, he puts the puppet on his hand and it speaks in a Cockney accent, and convinces him to try an experimental form of self-prescribed therapy (although the Beaver claims that it is prescribed by his doctor, Dr. Masey) in which he will only speak through the puppet and people will only address the puppet, to create distance between Walter and the negative aspects in his life.

Meanwhile, his teenage son Porter (Anton Yelchin) has a secretly documented obsession with documenting similarities between his father and himself (he has listed forty-nine similarities, including seemingly benign physical behaviors such as "bites lip" and "massages eyebrow") in an attempt to become more aware of them and avoid being similar to his father. He also is saving up money by getting paid to do other students' homework for them.

He gets a surprise when the valedictorian and cheerleader, Norah (Jennifer Lawrence), asks him to write her graduation speech.

While Walter's wife (Foster) and older son are initially skeptical and disturbed by the Beaver, respectively, his younger son Henry enjoys the quality time that it provides. After noticing how the Beaver does woodworking, Walter appoints the Beaver as the new CEO and begins getting new ideas for a toy line.