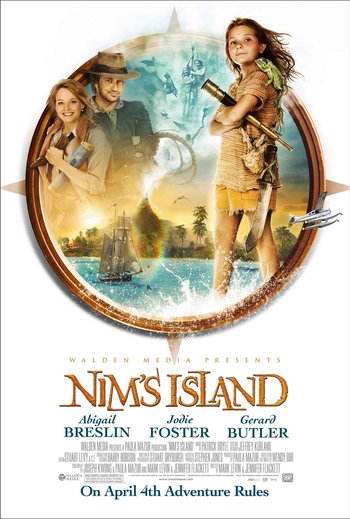 Nim's Island is a preteen adventure-fantasy novel by Wendy Orr, first published in 1999.

The story is centered around a girl named Nim Russo, and her adventures with her father on and around a secret island untouched by humans. At times the story reads like a Lighter and Softer Robinson Crusoe-esque Slice of Life, but there are two main plot threads. One centers around Nim's father, who goes away on a research trip but is nearly killed in a storm; the other centers around Nim's unlikely but growing friendship with a writer named Alex via email. In the background are themes about family, growing up, friendship, and a Green Aesop.

In 2008, Nim's Island got a film adaptation starring Abigail Breslin, Jodie Foster, and Gerard Butler, which is much more famous than the book. The plot is more or less the same, with the exception of the Troppo Tourists subplot which is removed altogether.

This work and its adaptation provides examples of: