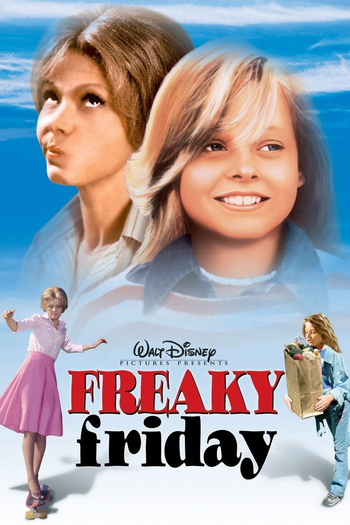 "I wish I could switch places with her for just one day..."
— Annabel and Ellen
Advertisement:

Freaky Friday, based on a novel by Mary Rodgers, is a Disney movie starring Jodie Foster as a teenage girl, Annabel, who does not get along with her mother, Ellen (Barbara Harris), to say the least. One Friday the 13th (hence the title), they wish to switch places for one day, causing them to magically trade bodies. Hilarity Ensues, including the now-young mother lusting after her daughter's boyfriend. It eventually transpires that they had subconsciously switched bodies in order to learn An Aesop about the value of family and friendship.

There was also a sequel and three remakes, each less similar to the book than the last. The first remake was a 1995 TV movie, with tropes listed below. The story returned to the big screen via a 2003 film that starred Lindsay Lohan and Jamie Lee Curtis, with a slightly different plot. The third remake actually started out as a stage musical, until Disney Channel adapted it into a 2018 TV movie.