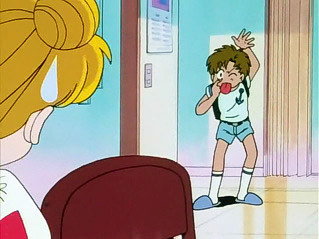 One of those occasions she'd rather be an only child.
"I was trying to make [Arthur] feel rotten, and he feels great. I’m a failure as a little sister."
— D.W. Read, Arthur, "The Short, Quick Summer"
Advertisement:

The Annoying Younger Sibling is often used by writers as a balance to the "coolness" of the main protagonist. Typically the opposite sex of the main character.

Little brothers tend to be: dirty and/or messy, good at sports, noisy, foul-mouthed, always get in trouble with authority, perverted, and just about always grabby when they see something their older sibling has that they don't, who will probably shriek "gimme gimme" and break it if they get their mitts on said object. Usually a Bratty Half-Pint, or in royalty, he's very likely to be The Evil Prince.

Younger sisters are usually: whiny, prone to cry (especially in order to get what they want), too curious, go headlong into real danger, ALWAYS have tea parties with dolls and one "real" participant, cheeky, nosy. Likely to be a Bratty Teenage Daughter if older than the standard.

Alternatively, it may be that the younger sibling in question has none of the above attributes, but incurs the wrath of the main characters in equal measure by being cleverer than they are, or by getting a disproportionate amount of (inevitably positive) attention.

Annoying younger siblings of both genders tend to be tag-alongs, especially when they're not wanted. Typically, there will be something of an age gap between the protagonist and the annoying younger sibling, about three to eight years in general. Usually with too much of a gap, the sibling will lack the resources to be annoying enough and with too close of a gap, you're into Sibling Rivalry territory instead, but larger and smaller age gapped siblings who are like this aren’t unheard of. Taken to the extreme by crossing Moral Event Horizon and you will see a Cain and Abel scene, or in worst, a case of Sibling Murder.

If the Annoying Younger Sibling is a late-introduced character to complicate the already-established siblings' relationships, then you have Cain and Abel and Seth.

If it's the older (usually male) sibling who is annoying towards the younger sibling, then it's either Aloof Big Brother or Big Brother Bully.

Note that this trope is for younger siblings who are annoying to the other characters, not to the audience.

This is a very frequent occurrence in the Numberjacks sofa.

This is a very frequent occurrence in the Numberjacks sofa.