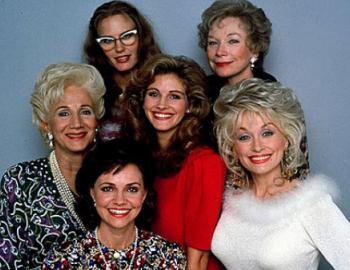 Steel Magnolias is a 1989 Dramedy film directed by Herbert Ross and starring Sally Field, Shirley MacLaine, Olympia Dukakis, Dolly Parton, Daryl Hannah, and Julia Roberts. It is adapted from the 1987 off-Broadway play of the same name by Robert Harling.

The story revolves around the lives of the employees and patrons of Truvy's Beauty Parlor in Louisiana. The main characters are:

The plot kicks off on Shelby's wedding day, when Annelle first comes to town and befriends the other five women. Together, the six women experience love, joy, sadness, loss and friendship as their lives begin to change all around them. Perhaps the most drastic change is when Shelby becomes pregnant, despite her doctor advising her against it due to her health. M'Lynn is terrified, and doesn't want Shelby to put her body through any more, but Shelby is determined to have her baby, realizing that no judge will let someone with her health records adopt one. M'Lynn knows she can't stop her, but worries that the risk may simply be too high.

Roberts earned her first Academy Award nomination for the 1989 film, its sole nomination.