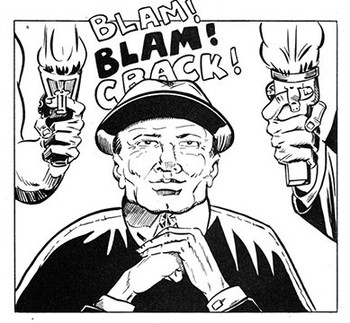 Either that man is deaf, or those sound effects are just painted on the wall.
Joey: [running through a script] Dude, there's no need to shout.
Ross: [still shouting] There was just an explosion! My hearing would be impaired!
— Friends
Advertisement:

Guns are loud. In Real Life, hearing protection exists for a reason. Exposure to 140 decibels (the loudness of gunfire) can cause pain and permanent hearing loss. That's why people at a shooting range typically are required to wear earplugs, with frequent shooters investing a lot into top-notch protection, and that's why deafness is a real occupational hazard among soldiers. Weapon silencers are also employed for similar reasons in real life, but less often in media.

Yet in fiction, even as badasses are using guns and explosives and outrunning explosions, they don't seem to be affected by the sound at all.

This is an acceptable break from reality, as no one wants to hear about the badass losing his hearing from trying to outrun a fireball or surviving a shootout. note As an aside, there is some Truth in Television here, since numerous police officers and soldiers have reported hearing normally but for gunfire during combat situations. This is sometimes referred to as "auditory exclusion

." And no one wants to see him putting in earplugs or wearing gigantic earmuffs, either. Typically, only coward-type characters will cover their ears while anticipating an explosion.