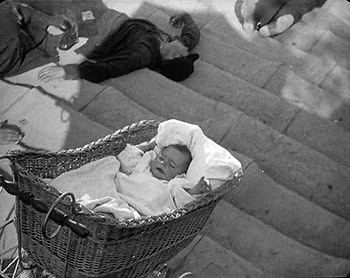 Mama's out for a stroll with little junior in his Baby Carriage. Too bad she's wandered into a Chase Scene!

If there is a car chase, there will be a woman pushing a baby carriage (aka, pram or bassinet). In Real Life, you will never see as many women pushing baby carriages down the street as you will during a car chase in a movie or TV show. Obviously, this device works because the idea that a baby might be harmed as the result of a chase adds instant Drama. Of course, don't expect the drama to last long. It's usually just a temporary distraction, Improbable Infant Survival assures that both drivers will be able to swerve around said Baby Carriage.

In older comedies, nothing much was thought of having the baby actually get hit, even by the protagonists.

Sometimes subverted by having the protagonist horrified that he can't avoid hitting the carriage — only to find, as the carriage tumbles over the hood of the car, that it didn't contain a baby at all, just groceries or something equally innocuous (think Speed: "They were only cans!")

See also Fruit Cart and Chase-Scene Obstacle Course for other stock obstacles that will get in the way of a Chase Scene, no matter how improbable their location may be. For detailed homages to one of the most famous dramatic film uses of the trope, see Odessa Steps.

A woman carries a baby down the street into Mike Kowalski's and Mimi's car chase. Both avoids them with their cars in time.

A woman carries a baby down the street into Mike Kowalski's and Mimi's car chase. Both avoids them with their cars in time.