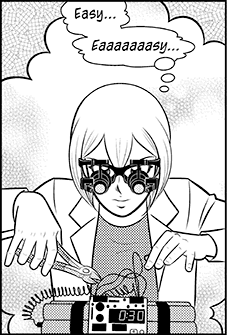 Here, it's a metaphor. But it's always a good metaphor.
"Some days you just can't get rid of a bomb!"
— Batman, Batman: The Movie
Advertisement:

Bombs, mines, and other explosives are a pain to deal with, especially if they're blocking your way, hidden, or need to be immediately removed. In fiction, you can set them off, disarm them before continuing on, throw them far far away, eat them, etc.

In real life, this isn't so easy. Even with proper equipment, it's a dangerous job disarming explosives. And it's probably worse if you have to set them off using nothing but a stick. Thankfully, there are remote controlled robots that help make the job a little safer. Hence why this trope is a subtrope of Artistic License – Explosives.

In shows where physics is on a vacation, expect people to do things like swallowing the bomb or stuffing it into a not even nearly bombproof container, like a paper bag. See also Bombproof Appliance for more "serious" shows.