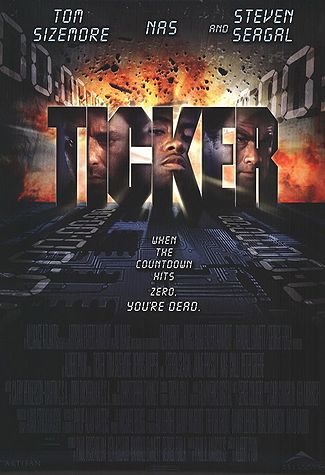 Ticker is a 2001 action film directed by Albert Pyun.

The film opens with a hostage situation at the house of a United States Senator. A bomb has been planted somewhere within. Frank Glass (Steven Seagal) is in charge of the bomb squad out to defuse it. Alas, once it seems they've succeeded, they turn out to be mistaken, and the bomb explodes anyway.

A year later, in San Francisco, two cops — Ray Nettles (Tom Sizemore) and his partner Art "Fuzzy" Rice (Nas) are driving around talking. Nettles and Fuzzy are narcotics cops. Nettles is a cop on the edge. His wife and son were killed by a bomb. Ever since then, he has lost his enthusiasm for his job, hygiene, and life in general. When the two are dispatched to a crime scene where Irish mad bomber Alex Swann (Dennis Hopper) and his gang are hiding; Fuzzy ends up getting killed and one of the gang, Hot Scientist Claire (Jaime Pressly) is arrested. Swann escapes. He starts planting bombs all over the city, and demands that unless the police release Claire, he will detonate one every hour, killing hundreds of civilians. Nettles and Glass team up to stop him.