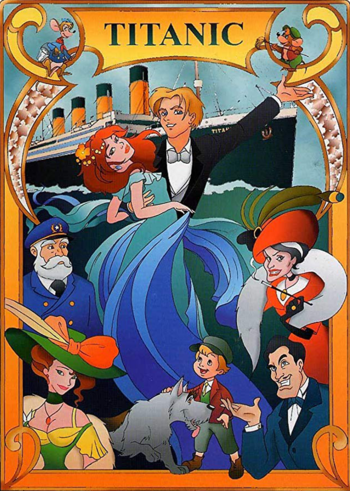 Because it's common knowledge that the Titanic was just a "legend". And that there was a rapping dog on board.
"You know there's something you should know, so I'm gonna tell you so! Don't sweat it! Forget it! Enjoy the show!"
— Fritz, opening the "Party Time" number
Advertisement:

The film follows the adventures of a Cinderella Captain Ersatz named Angelica, who boards the Titanic with her wicked stepmother and her stepsisters. In a role-reversal of the romance from the better-known James Cameron film, the poor girl falls in love with a rich young man (whose nanny happens to be Angelica's long-lost real mother).

Accompanying them on the voyage are a family of immigrant mice, a thieving magpie, a Cruella de Vil lookalike and her Cockney henchmen, a detective who dresses like Sherlock Holmes, a trio of Mexican mice, and an anachronistic rapping dog. You will not be able to follow what they're doing or why they're doing it.

The ship eventually hits an iceberg and sinks, of course — but in this Lighter and Softer fairy tale treatment of the Titanic story, nearly all of the characters we're introduced to in this film survive the disaster and live Happily Ever After.

There are two versions of the film: the original cut, and a more well-known Re-Cut which features completely different songs and a more coherent plot than the original cut. The latter version was bundled free with some cheap DVD player bundles in the early days of DVD technology.

Not to be confused with the other Titanic musical, which is about the actual people who were on the ship.

Nor should it be confused with another Italian film called The Legend of the Titanic, which is an entirely different animated Titanic movie.

Titanic: The Legend Goes On proves examples of the following tropes: