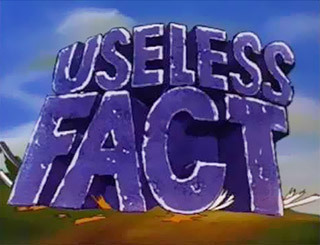 "And now, another...useless fact!"
Charlie Brown: Now, Lucy, I know that's wrong. Snow doesn't come up, it comes down.
Lucy: After it comes up the wind blows it around so it looks like it's coming down, but, actually, it comes up out of the ground, like grass. It comes up, Charlie Brown, snow comes up.
Charlie Brown: Oh, good grief—
Linus: Lucy, why is Charlie Brown banging his head against a tree?
Lucy: To loosen the bark so the tree will grow faster. Come along, Linus.
— You're a Good Man, Charlie Brown, "Little Known Facts"
Advertisement:

It is often said that truth is stranger than fictionnote But it is never as strange as lies. Little Known Facts are much too strange to be true. These improbable legends may be explained by the Know-Nothing Know-It-All, The Ditz or the Cloudcuckoolander, or just by someone trying to take advantage of the gullibility of some person, usually a child. If any questions are asked, the answers will only compound the absurdity.

For the record, snow comes from up, not down. That's why you never trust a quack like Lucy Van Pelt.

Compare The Blind Leading the Blind, Don't Be Ridiculous, "Common Knowledge", and Lies to Children. If said facts are true, it's not this trope. It's probably Reality Is Unrealistic, or one of its subtropes.

There is also one intended-to-be-true fact that isn't quite right. Pennsylvania's state bird is the ruffed grouse, not the ruffled grouse.