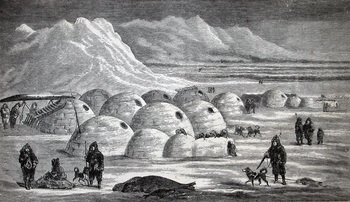 The far north counterpart to Injun Country, and part of the Hollywood Atlas. Expect any Inuit villages to be a mishmash of outdated stereotypes. Polar Bears and Penguins are the only wildlife features in the otherwise blank white landscape. The plant life is non-existent, the snow never ever thaws. The only people around are Inuit who never, ever take off their parkas, and they spend each and every day dog sledding, ice fishing, and seal hunting. They eat nothing but blubber, their ice igloos are their permanent residences (rather than their actual use as temporary shelter), and they know nothing about the modern world. And, of course, they send their old people off to die on ice floes, either from exposure, starvation, or simply as polar bear food.
Advertisement:

A note on terminology: Many people nowadays consider the word "Eskimo" derogatory (it doesn't help that the term is sometimes thought to derive from expressions meaning "eaters of raw meat" in other Indigenous languages, though less pejorative etymologies have also been proposed). The most common alternative, especially in Canada and Greenland, is "Inuit" (meaning "the people" in the Inuit language Inuktitut). Note that "Inuit" is plural when used as a noun, while the singular form "Inuk" refers to an individual of Inuit origin. Complicating matters further, the Inuit aren't the only ethnicity that's historically been lumped as "Eskimo", so the proper terminology varies depending on where you go:

Note that while the Arctic regions of Northern Europe and European Russia don't have any Inuit, Yupik, Aleut, or related peoples, they do have an equivalent in the Sámi (older name: Lapp) people of Finland, Norway, Sweden and the Kola Peninsula, who, while not being a related ethnolinguistic group (they are ethnically European and speak a language that is related to Finnish), are very similar in their culture and their perception and treatment by the rest of the Europeans that make up their countries, and are included with them as Arctic peoples.

Asian Russia, on the other hand, has a much more diverse plethora of indigenous Arctic peoples than the Americas, some (including the Yupik and Aleut peoples mentioned above) related to the Inuit, some not. This makes sense when you consider that all indigenous peoples of the Americas, from the Inuit in the far north to the Selk'nam of the Tierra del Fuego, are all descended from North Asians (they migrated there when the continents were connected during the Late Pleistocene). In addition to Yupik and Aleut peoples, the Russian Far East has the related Chukchi, Koryaks and Itelmen, the Evens and the Nanai (both being nomadic cousins of the Manchu of Northeast China), the Nivkh, and even a brand of Turks (the Yakuts). Many Russians also lump non-Far Eastern peoples, such as the Siberian Nenets and the aforementioned Sami, under the generic label of "Arctic peoples" as well, since, numerically, they are completely dwarfed by ethnic Russians even when taken together (yes, Russia did have its own version of Manifest Destiny).

As another side note, this stereotype has even less basis in reality than most—they have a cultural tendency towards Hot Bloodedness (and, in common with other First Nations/Native peoples, an unfortunate propensity to alcoholism), have had a very bloody history with intertribal warfare, and will quite cheerfully use modern technology to make their lives a bit easier. Snowmachines are very popular, and rifle hunting is a favorite pastime. And Elders (at least in Canada), especially those who actually grew up in a more traditional lifestyle, generally tend to think that anyone pining for the Good Old Days before modern conveniences, technology, and medicine is utterly insane.