Western Animation / What A Cartoon! Show 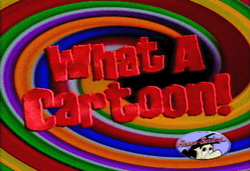 The What A Cartoon! Show (originally known as World Premiere Toons, and later renamed The Cartoon Cartoon Show) was an anthology show on Cartoon Network running from 1995 to 1997, with a few scattered shorts airing towards the end of The '90s. Created by then-president of Hanna-Barbera Fred Seibert as a throwback to theatrical studio cartoons from The Golden Age of Animation, it was described as "48 chances to succeed or fail" at potential original programming. The premiere of the project was on a special hosted by Space Ghost.

True to Seibert's word, 48 cartoons were produced by a generous handful of creators (mostly Hanna-Barbera staff), each reflecting the artist's individual style and sensibilities. Five of the shorts — Dexter's Laboratory, Cow and Chicken, Johnny Bravo, The Powerpuff Girls and The Chicken from Outer Space (which became Courage the Cowardly Dog) — would go on to be the network's first original shows, or Cartoon Cartoons. One wound up being the prototype for a much more popular toon later on (Larry & Steve would serve as one of the inspirations for Family Guy.) Bill Hanna and Joe Barbera themselves got back in the director's chair to create "Hard Luck Duck" and two shorts featuring Dino of The Flintstones, respectively. Others, such as Yoink of the Yukon, Pfish & Chip, Yuckie Duck, and Shake & Flick, were not as successful, but have gained a strong cult following from classic CN fans.

After the show's initial 1995-97 run, Fred Seibert would leave Hanna-Barbera to produce a counterpart series for Nickelodeon at his own production company, Frederator Studios. In the meantime, CN would retool the series into The Cartoon Cartoon Show, with then-vice president of Cartoon Network Sam Register now serving as producer. The rebranded anthology series now showcased new episodes and reruns of the network's full-series cartoons in addition to premieres of new pilot episodes. Three new shorts were made in 1998 and 1999, those being Kenny and the Chimp, Mike, Lu & Og, and King Crab: Space Crustacean; the second of these would be greenlit into a series. In 2000 and 2001, Cartoon Network would take a more direct approach with "The Big Pick", in which viewers got to vote for brand-new series from that summer's collection of ten pilots. The winner of the 2001 "Big Pick" was The Grim Adventures of Billy & Mandy, with runner-up Whatever Happened to... Robot Jones? also getting picked up.note The original Sheep in the Big City short was aired as part of that "Cartoon Cartoon Summer" as well, but had already been greenlit. In the summer of 2002, the winner would be Codename: Kids Next Door, with runner-up short Lowbrow also getting the greenlight to become Megas XLR.

In the late 2000s, a spiritual successor was being produced in the form of Cartoonstitute, and was to be headed by Craig McCracken and Rob Renzetti, both of whom got their start on WAC. It never came to be due to both financial issues and the channel's live-action push at the time, although of the shorts that were completed, two of them (Regular Show and Uncle Grandpa) went on to be successful series in their own right. In the years since the failure of Cartoonstitute, while Cartoon Network continues to publicly showcase new pilots online (under the name Cartoon Network Minis) in order to gauge viewer response in a similar way as all these prior shows, they no longer are packaged into an anthology series of any kind.

On April 15, 2021, Cartoon Network announced that they will be creating a brand new anthology series of shorts titled, ''Cartoon Cartoons''

(Named after the network's original brand name for its animated shows).

open/close all folders
What A Cartoon! Shorts
Cartoon Cartoon shorts

Dino feeds a baby dinosaur with an appetite that seems insatiable.

Alternative Title(s): What A Cartoon

Dino feeds a baby dinosaur with an appetite that seems insatiable.