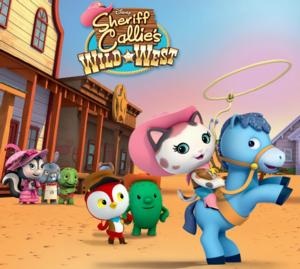 Sheriff Callie's Wild West is an All-CGI Cartoon that premiered on Disney Junior's website in December 2013, then began running on the cable channel in January 2014. It's billed as "the first Western for preschoolers".

In a World of Funny Animals based on The Wild West, Sheriff Callie (a calico cat voiced by Mandy Moore) makes sure the town of Nice and Friendly Corners lives up to its name. Along with her deputies Peck (a woodpecker) and Toby (a walking, talking cactus), Callie helps the townsfolk get along through pro-social lessons about The Power of Friendship, with plenty of Western tropes and musical numbers along the way.

The series was renewed for a second season,

which premiered in September 2015. The new season comes with a new Title Sequence, as well a brighter and crisper look that likely originates with the change in production company from DHX Media (of My Little Pony: Friendship Is Magic and Littlest Pet Shop (2012) fame) to Wild Canary Animation. DQ Entertainment is also listed in the credits as providing additional animation.

However, the second season is the program's last, as show star Mandy Moore was cast to return as Rapunzel for an animated series based on Disney's Tangled.