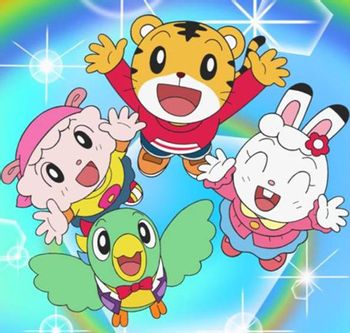 Shima Shima Tora no Shimajirō (しましまとらのしまじろう, lit. "Striped Island Tiger Shimajirō") is a 1993 Japanese children's Slice of Life anime series primarily aimed at preschoolers. It is based on the Kodomo Challenge educational program by Benesse, which debuted in 1988.

The entire series focuses on Shimajirō Shimano, a curious tiger boy living in Challenge Island, as well as on his friends to a lesser extent. Being the eldest in a two-child family, Shimajirō attends kindergarten alongside his friends- Torippi the parakeet, Mimirin the snow rabbit, and Ramurin the lamb (later replaced by Nyakkii the kitten) as they all discover everything around them, and learn valuable lessons as they grow up.

The show currently airs every Saturday at 8:30 AM on TV Tokyo. The Qiao Hu dub, meanwhile, airs several times a day on ETTV Yoyo in Taiwan which is also available through select Pay TV providers throughout Asia.

The series first started as a segment in the Kodomo Challenge direct-to-video tapes in 1988, but broke out into its own show in 1993. It has had several retools since it's launch, each time getting a new name:

In April 2020, Benesse and WildBrain partnered up to create an online-exclusive English dub of Shimajiro no Wao! called Shimajiro: A World of Wow! (Or Shimajiro: A Wonderful Adventure, depending on which market Benesse thinks you're in). WildBrain would further engage Funimation as their dubbing partner. The dub is overseen by Iyuno Media Group and uses talents from Bang Zoom! Entertainment with feedback from Benesse. Several segments from the Kodomo Challenge program were also dubbed. The dub is primarily uploaded to it's own Youtube channel, but notoriously, the channel on and off blocks access to the episodes from half of the world. The dub is also uploaded onto Wildbrain's numerous Youtube channels. This dub is also streamed in Japan on Netflix alongside the original Japanese show, and a selection of it was eventually made available to the rest of Asia (and even the Indian subcontinent) on Netflix in 2021.