The Easy Way or the Hard Way 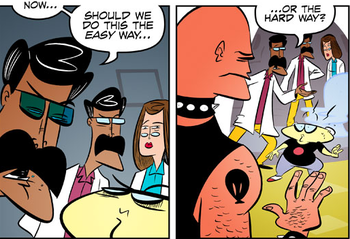 "Now Gary, we can do this the hard way or the easy way.
Or the medium way. Or the semi-medium-easy-hard way.
Or the sort of hard with a touch of awkward-easy-difficult-challenging way."
— Spongebob Squarepants
Advertisement:

A Stock Phrase. The easy way is usually giving in, and the hard way usually involves some kind of violence or torment.

A popular variation for badasses is "We can do this the easy way or the really easy way." Offering two variations of "hard way" and no "easy way" or even "the fun way" is also common, as is stopping mid-sentence to "remember" that there isn't actually a choice being offered.

Sometimes, one of the tormentors will even say, "Please, choose the hard way!" to show just how much he likes it.