Spoilers for this film, as well as the previous film, will be left unmarked. You Have Been Warned. 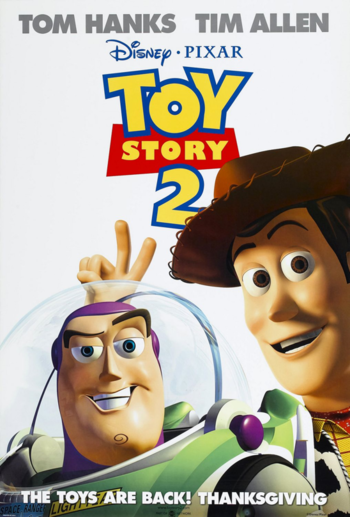 The toys are back in town.
"Yee-haw!"
— Jessie
Advertisement:

Toy Story 2 is the 1999 sequel to the first film, which takes place a year or two later. Woody is accidentally damaged during one of Andy's play times, which causes him no end of concern about becoming an unwanted "broken toy." Later, Woody gets stolen at a yard sale by greedy toy collector Al, so Buzz leads a group of Andy's toys to go rescue him. Meanwhile Woody finds out he's a piece of merchandise from an old kids' show called Woody's Roundup after meeting three other tie-in dolls based on his sidekicks on the show, and that he himself is a valuable collector's item. Woody discovers that they're all going to be sold to a toy museum in Japan, and he has to decide whether to go back to Andy — who will eventually outgrow him — or go to the museum and last forever, but never be loved.

Notable for being Pixar's first sequel, and for spawning a spinoff television series, Buzz Lightyear of Star Command. In 2009, it was re-released alongside Toy Story as a double feature in stereoscopic Disney Digital 3-D, with the two films completely re-rendered to match the level of detail of Toy Story 3 (the UK had to wait until January 2010 for Toy Story 2 to come out in 3D).