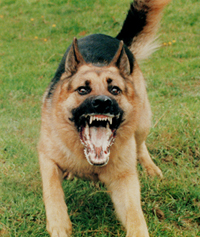 Dogs Are Dumb, right? You're wrong on this one.

This is where a dog is really, really mean to anyone and everyone, anything and everything, whether rabid, genetically tampered with, or trained from birth to be that way. If the dog has an owner, then sometimes even the owner can get on the dog's wrong side from time to time.

This type of dog is not a Hellhound, but is a rather normal and standard dog aside from his viciousness. He CAN be kicked, but 9 times out of 10 Failure Is the Only Option where that is concerned. Indeed, kicking him successfully will often make you look reasonable.

Oftentimes they can launch on squirrels, if spotted. A Cute Kitten might also be a favored target of a Vicious Dog, especially when Cat/Dog Dichotomy comes into play.

Not a savage wolf, though given his Super-Persistent Predator temperament, he may as well be.

May be an Angry Guard Dog, a Bully Bulldog or a Psycho Poodle, although those types usually guard homes or properties. The Vicious Dog, on the other hand, is mean regardless of his size or breed and regardless of whether he's a pet/guard dog or not.

The Mister Muffykins are usually a puppy or small dog version of this, given their tendencies to get on everyone's nerves. Of course, like the aforementioned dogs, they can attack people, among other things.

The Evil Counterpart of the Big Friendly Dog. Very likely to be a Right-Hand Attack Dog if it's owned by the villains.

If a Big Friendly Dog or a dog that's normally a Gentle Giant gets infected with rabies or is genetically tampered with, chances are very good that he'll become this. In which case, BE VERY AFRAID.

Even if the Cats Are Mean, they can still be horrified by these kinds of dogs.

The Werewolves Are Dogs-kind of werewolves are prone to behaving like this.

The trope takes its name from the frequent signs on the front of homeowners' gates, usually reading simply "Beware Of Dog," that warn visitors about the potential badness of the resident pooch. Incidentally, if you put up one of these signs, be warned — this will not reduce your risk of getting sued if the dog attacks someone. In fact, it weakens your legal defense, since the sign proves you know the dog is dangerous.

Blitzo's adoptive Daughter shows the D.H.O.R.K.S. why exactly you don't go picking a swordfight against a Hellhound.

Blitzo's adoptive Daughter shows the D.H.O.R.K.S. why exactly you don't go picking a swordfight against a Hellhound.