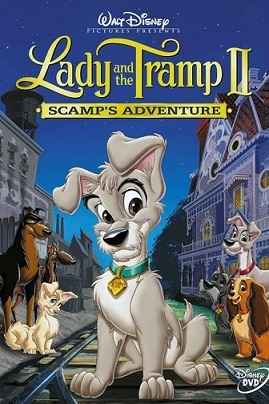 A sequel to Disney's 1955 classic Lady and the Tramp, and the first Direct to Video sequel for one of Walt Disney's animated movies. The story finds Lady and Tramp being the proud parents of a litter of pups, which includes three well-behaved girls and one rambunctious boy puppy named Scamp (voiced by Scott Wolf). In search of adventure and a "real" dog life, Scamp strays far from home and meets the cute Angel (voiced by Alyssa Milano), Buster (voiced by Chazz Palminteri), and Buster's gang of Junkyard Dogs. Although he found the adventure he was looking for, Scamp finds his thoughts returning to home and the loved ones he left behind.

Example of:
Don't Wake the Sleeper