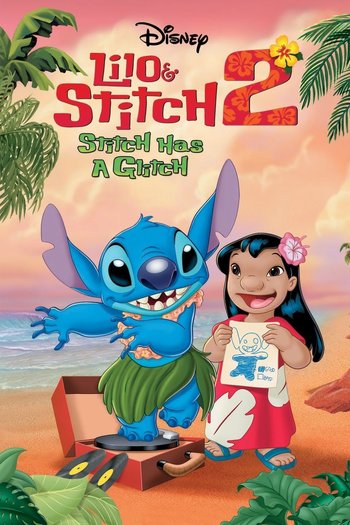 Lilo & Stitch 2: Stitch Has a Glitch is a 2005 Direct to Video animated science-fiction comedy-drama film directed by Tony Leondisnote this film is his directorial debut; he would later direct Igor and the infamous The Emoji Movie and produced by Disneytoon Studios. It is the third film released in the Lilo & Stitch franchise, though it is the second film in the franchise's chronology, taking place between the events of the 2002 original film and Stitch! The Movie. This is also the only film in the franchise where Lilo is not voiced by Daveigh Chase. Instead, her good friend, famed actress Dakota Fanning, voices her here.

After Stitch awakes from a nightmare in which he was evil again, attacking Lilo and the people on Kauaʻi, Lilo reassures him that his "goodness level" is now higher than ever. After the two arrive at the halau hula, "Kumu" Moses announces that Lilo and the other students must prepare an original hula dance for the upcoming May Day festival, for which there will be a competition. Lilo is inspired to win after Moses shows her a photograph of her late mother winning it in the past at her age. However, during a family fun night, Stitch abruptly freaks out and suddenly reverts to his former destructive behavior for a bit. Jumba realizes that Stitch is suffering from a glitch that is the result of not having his molecules fully charged when he was created, since "those idiot police" cut off the charging process when they arrested Jumba and Stitch. If Jumba doesn't make a new fusion chamber soon, Stitch will shut down permanently. Meanwhile, while Lilo is preparing for the hula competition, Stitch continues to have more destructive fits and threatens to ruin her chances of winning the competition, causing some serious friction in their friendship.

Also included on this film's DVD and Disney+ extras is a short film, The Origin of Stitch, which also takes place before Stitch! The Movie. In it, Stitch finds Jumba's secret computer revealing what strange and horrible creatures were used to make the otherwise cute and fluffy experiment, and even hints at the other experiments.

Not to be confused with the video game Lilo & Stitch 2: Hämsterviel Havoc, which was released a year earlier as the tie-in game to Lilo & Stitch: The Series.