Manhua / Hitori no Shita: The Outcast 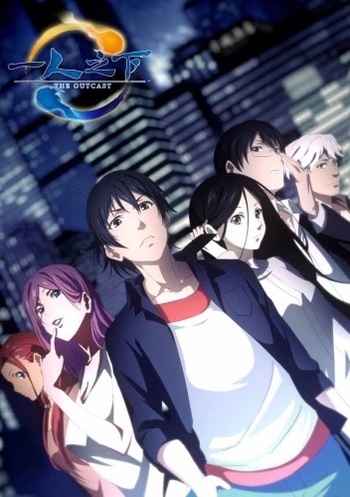 On a week-long break from college, Chou Soran visits his old hometown to see the grave of his grandfather, Chou Shakurin. There is a problem: someone stole the body. An attempt to investigate the grave robbery engulfs Soran in the secret conflicts of ki manipulators, the Outsiders.

The family martial arts just so happened to centre around Ki Manipulation, and Chou Shakurin was a very powerful Outsider. Naturally, many factions of Outsiders are very interested in the Chou grandfather and grandson. Not all of the interested parties are friendly, though.

Hitori no Shita: The Outcast (Yi Ren Zhi Xia in China) is a webmanhua written by Dong Man Tang and illustrated by Mi Er. An anime adaptation, a Chinese-Japanese co-production, premiered in July, 2016. It is available streaming on Crunchyroll

Tropes in both seasons of this series include: